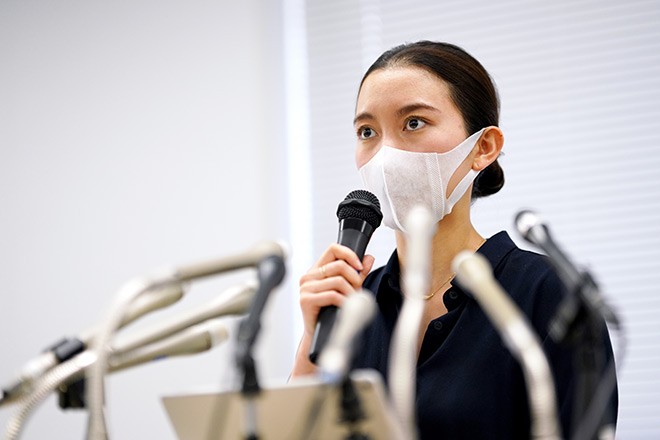 Shiori Ito, a journalist and the face of Japan’s #MeToo movement, is suing a cartoonist for a series of Twitter posts she said smeared her after she went public with her rape accusation.

In the libel suit filed at the Tokyo District Court on June 8, Ito is also suing two men for retweeting Toshiko Hasumi’s posts.

The plaintiff is seeking a total of 7.7 million yen ($71,300) from the female cartoonist and the men. She is also demanding the tweets be taken down.

“The posts were targeted at me, but other victims of sexual assault also feel crushed” by such posts, Ito said at a news conference she gave after filing the suit. “I was compelled to take action.”

Ito, 31, said she was also prompted by the recent suicide of Hana Kimura, a 22-year-old professional wrestler, who had become the target of intense cyberbullying.

The tweets at the center of the libel suit are related to the previous high-profile legal proceedings that made Ito a symbol of Japan’s #MeToo movement.

Ito had filed a criminal complaint against Noriyuki Yamaguchi, a former reporter with Tokyo Broadcasting System Television Inc., accusing him of raping her when she was intoxicated and unconscious in April 2015.

But the Tokyo District Public Prosecutors Office decided not to indict him in July 2016, citing insufficient evidence.

In a damages suit she filed against Yamaguchi, the Tokyo District Court ordered him to pay 3.3 million yen in a ruling handed down in December. The court acknowledged he had sexual intercourse without her consent.

The defendant, 54, who wrote a book about Prime Minister Shinzo Abe and is said to be close to the leader, has appealed the court decision.

The defamation lawsuit revolves around five tweets posted by Hasumi between June 2017 and December 2019. The tweets came after Ito spoke at a news conference, with her full name revealed, in May 2017 to discuss how she suffered from Yamaguchi’s attack.

In a tweet posted in February 2018, Hasumi drew a woman wearing a T-shirt emblazoned with the name “Yamaguchi.” The drawing included such comments as: “I slept with a big-name reporter by way of trial,” and “I screwed up sleeping my way (into a job).”

The other four tweets had similar contents.

In the complaint, Ito contended that anyone who looked at the drawing would conclude it was clearly meant to be her.

The posts are “extremely vicious,” the complaint said, because they denounced Ito’s going public about the attack as “unjustified resentment and false accusation with the aim of getting money.”

She also argued those tweets constituted a “second rape.”

As for the two men she is suing, she said they should realize that their act amounts to agreeing with the cartoonist’s tweets.

At the news conference, Ito said she was forced to move her home base to Britain as she became so fearful of going out in public in Japan following the online bashing against her over her rape accusation against Yamaguchi.

Ito called on Hasumi to think about whether the contents of the tweets are something the cartoonist would say to her face.

Hasumi has insisted that the tweets in question were works of “fiction.”