Number of job losses during pandemic surges past 20,000 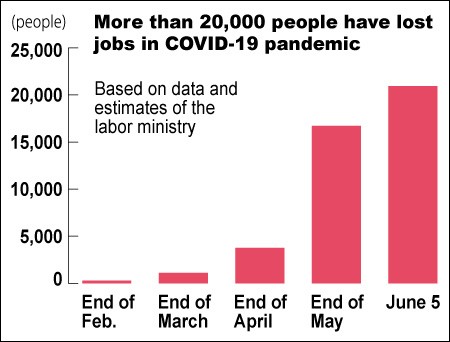 More than 20,000 people have lost jobs because of the novel coronavirus pandemic, with the services industry and nonregular workers being hit particularly hard, according to the labor ministry.

The ministry’s latest data, released on June 9, shows that 20,933 people were dismissed from their jobs or were denied contract extensions or renewals as of June 5.

The figures represent only what local labor offices have known, and the ministry expects the real number of people who have lost work is much worse.

In May alone, about 13,000 people lost their jobs because of the virus, the ministry’s data showed. But it took only about two weeks for another 10,000 workers to lose their jobs, a clear indicator that employment conditions continue to deteriorate.

As of the end of April, the number was 3,774, but it began to spike after the Golden Week holidays ended.

In the week until June 5, 4,210 people newly reported their loss of employment. Over 60 percent, or 2,577 of them, were nonregular workers, including those on part-time or temporary staff contracts.

Among the weekly total, 1,362 lost their jobs in the restaurant business, and 1,075 of them, or nearly 80 percent, were nonregular workers.

In the accumulative total, the biggest job loss came in the lodging industry, with 4,348 losing employment.

Workers in the restaurant industry followed, with 3,484, while 2,813 people lost their jobs in the manufacturing sector.