At the end, Shigeru Yokota had photos of his beloved Megumi 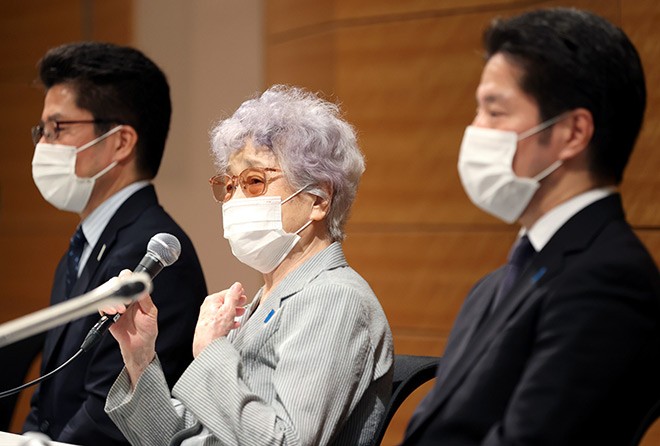 Lying on his deathbed, Shigeru Yokota had three photos close by of the beloved daughter with whom he yearned to be reunited after she disappeared in 1977 at age 13, and years later was confirmed to have been abducted by North Korea.

Yokota, who died June 5 at age 87, spent the final decades of his life waging a relentless campaign for the return of his daughter Megumi and other abductees, perhaps numbering as many as 17, according to Japanese government estimates.

Yokota's widow, Sakie, 84, joined by the couple's 51-year-old twin sons, Takuya and Tetsuya, talked about her husband's final moments in a news conference held in Tokyo on June 9.

As Yokota would have wished, his family renewed their determination to bring Megumi home.

Megumi, a first-year junior high school student, disappeared on her way home from school in Niigata, northwestern Japan, on Nov. 15, 1977.

During the news conference, Sakie looked back on her life working with her husband, a symbolic figure in the movement for the return of Japanese abductees.

“He put his heart and soul (into the activities to bring back the abductees) so much that he must have no regrets,” said Sakie. “I’m really glad that he looked peaceful when he was called to heaven.”

The family said Yokota had been hospitalized since April 2018 after his health deteriorated.

With three photos of Megumi to gaze upon at his bedside, Yokota stayed calm and was always smiling during the long period of hospitalization that lasted for two years and two months.

However, his condition took a sudden turn on June 5.

At the last moment, Sakie spoke loudly into his ear: “I know you can go to heaven. Don’t forget me, and wait for me when I go there.”

Yokota’s right eye appeared to be brimming with tears. He then drew his last breath as if he was falling asleep.

His family placed two bottles of his favorite sake in his coffin as well as a photo of Megumi on his chest.

Sakie said she wanted him to clasp the picture in his arms even though he never saw Megumi again after she was abducted by North Korea.

“My sister was the apple of my father’s eye,” said Takuya. “I feel really frustrated when I think about how much he missed her. I can never forgive North Korea.”

“I believe it’s our duty to carry out his wishes and tell him, ‘She is back,’” said Tetsuya.

Yokota's death leaves just Sakie and Akihiro Arimoto as the only surviving parents of abductees who have yet to return home.

Arimoto, 91, is the father of Keiko Arimoto, who was abducted by North Korea in 1983.

North Korea staged the abductions in the 1970s and '80s to train its agents in Japanese customs and language, among other things.