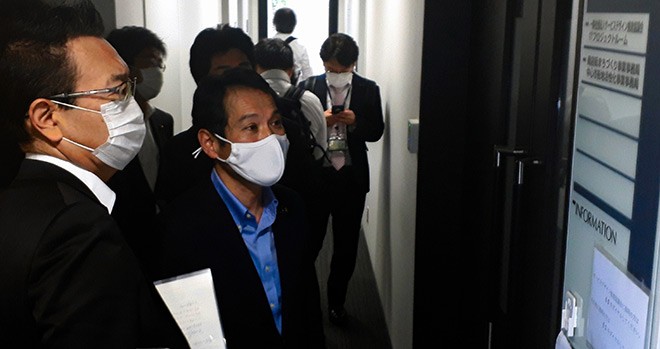 Opposition lawmakers visit the office of the Service Design Engineering Council on June 1 but were unable to ask any questions because no employees were there. (Ayumi Shintaku)

When Anglo-Irish satirist and author Jonathan Swift (1667-1745) published "Gulliver's Travels" in the 18th century, the earliest editions of the book did not credit him as the author.

Rather, the public was led to believe that Lemuel Gulliver, the novel's protagonist and narrator, was a real person who wrote the book, and that his manuscript somehow ended up in the hands of an anonymous publisher.

Was this some kind of an elaborate hoax pulled by Swift to drum up popular interest in the novel?

In his "Suwifuto-ko" (A study of Swift), Nakano argued this was done out of political consideration.

The only possible explanation, he asserted, was that because of the highly satirical nature of this work, both political and social, Swift felt the need to shield himself from the ire of the British political establishment and the Court of St. James.

Fast-forward to Japan today, and we have a case of an "anonymous contract order" rather than "anonymous publishing."

What "consideration" could have motivated advertising giant Dentsu Inc. to execute a government-ordered contract through an organization that is practically its dummy company?

The Service Design Engineering Council, a Tokyo-based "ippan shadan hojin" (general incorporated association) that is effectively controlled by Dentsu, was commissioned by the economy ministry to handle paperwork for a 76.9 billion yen ($719 million) project to provide financial assistance to small and midsize businesses hit hard by the COVID-19 pandemic.

However, the association "subcontracted" 97% of the project to Dentsu.

It was only thanks to media reports that this highly irregular arrangement was brought to light.

Had Dentsu played fair and square by bidding for the contract and carrying out the project to its conclusion, this could have been another feather in Dentsu's cap.

But that was not how it went down. Was there collusion between Dentsu and the government? Or did Dentsu intend to siphon off some of the project fund? The matter is being pursued in the Diet, but the government's explanations are hardly satisfactory.

In Lilliput, the island nation of tiny people where Gulliver washed ashore, politicians engaged in trivial tightrope-walking competitions. Swift must have added this episode to satirize the British political community of the time, but Japan today is certainly no stranger to this sort of trite political activity.

And when confronted with allegations of suspicious conduct, our politicos lie and obfuscate shamelessly, over and over, ad nauseam.