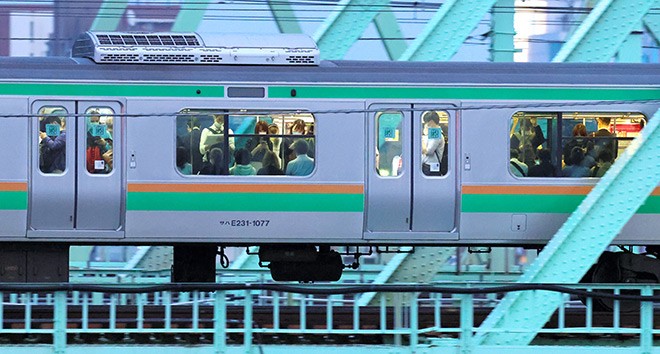 Windows of a train connecting Tokyo and Saitama Prefecture are left open to reduce the risk of COVID-19 infections despite rain on May 26. (Tatsuya Shimada)

It comes amid growing demand for the service following the lifting of the state of emergency.

The service will cover trains on major lines operated by JR East, such as the Tokaido and Chuo lines, and offer near real-time congestion status of trains, the company said.

Train ridership in the greater Tokyo area is increasing as more people return to their normal work commutes. Ridership started picking up after the state of emergency over the COVID-19 outbreak was lifted for all prefectures, including Tokyo, in late May.

“(You can) ride on a less crowded train by using the service,” a JR East official said.

JR East said the new service will be available on its JR East smartphone app. When a user chooses the name of a train line on the app, it shows icons of the trains currently running on the line. By tapping one of the icons, the congestion status of each train appears on a five-point scale.

The scale includes such categories as “Passengers can take seats” and “Passengers are standing shoulder to shoulder.”

The data reflects the status of about five minutes before a user searches the information, JR East said.

The railway operator started offering the service for its Yamanote loop line in Tokyo in 2014. The service was used around 1,000 times a day before the pandemic hit the country. But the number jumped about tenfold in late May and rose to 30,000 or so on June 8, when media reported the number of commuters slightly increased.