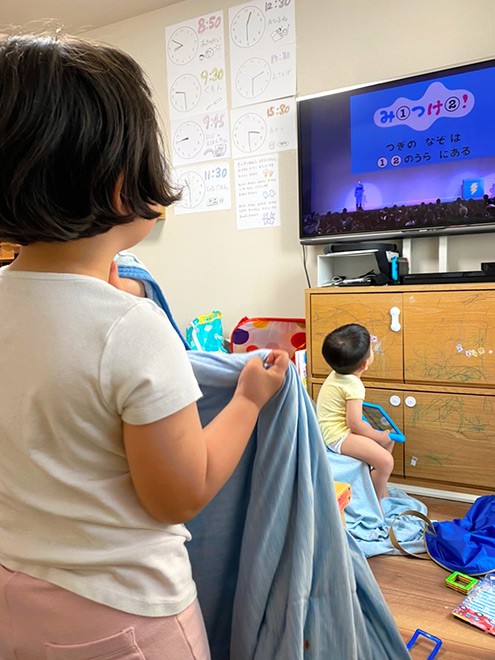 A mother takes care of her child at home under the state of emergency in Tokyo’s Minato Ward. (Provided by the woman)

Like many working mothers, a 44-year-old woman in Tokyo's Meguro Ward took her 2-year-old daughter to a nursery for the first time in nearly two months on June 1.

That was the first Monday after the state of emergency over the coronavirus was lifted in the capital, allowing many schools and nurseries to reopen and welcome back children who had stayed home for weeks.

Sending off her little one to the nursery, the woman could not help but pat herself on the back.

“You did great,” she told herself.

Amid the deadly virus pandemic, many women feel they have to do even more juggling of work and family tasks, particularly child rearing.

They hope that their husbands sharing the household work and parental duties equally will become the “new normal,” but such prospects are dim, experts said.

The seismic shift to teleworking changed many things in life, but certain things seem to never change, such as the reluctance of most Japanese men to help out at home. The work culture also continues to place priority on the husband's job.

The nursery asked the mother in Meguro Ward and other parents not to send their children after April 7, when Prime Minister Shinzo Abe issued the state of emergency for Tokyo and six prefectures to contain the novel coronavirus pandemic.

The woman, who works in the consulting business, as well as her husband, who is a company employee, had already started teleworking by then.

“We’ll survive this,” she thought initially.

There was a red flag, however.

When both parents were at home, their daughter did not want to spend time with her father.

“I want Mommy,” she would say, whether it was playing, eating or bathing.

Self-evidently, all burdens fell on the mother's shoulders.

Sometimes she had to let her daughter watch TV and videos on the internet so that she could focus on work. But she felt too guilty to continue doing it.

She hired a baby sitter when she had an online meeting with her clients. She worked after the child went to sleep.

Meanwhile, her husband’s life seemed not to have changed much.

He did not pay attention to their daughter, saying, “She looks happier with her mother.”

She could see he was busy with work. But in her eyes, he seemed able to focus on his job at least, unlike her.

Discouraged by his attitude, she lost her desire to talk to him about sharing household duties.

In late April, she learned that the nursery would probably not reopen until the end of June.

She became sleepless and exhausted, missing important work-related emails. She was nervous how the slowdown in her work would affect her career later.

“I can’t do this anymore,” she told her husband, who replied, “It’s not easy for me to work less.”

She gave up on the idea of sharing the child rearing duties. Instead, she chose to “solve the problems with money.”

She found an uncertified nursery that was still accepting children and paid 150,000 yen ($1,400) or so per month to take her daughter in.

“Yes, it was preposterous in terms of risks of getting infected with the virus,” she said. “It was an act of desperation.”

After that, she became able to focus on her work during the day. Her husband had started helping her a little in caring for their daughter, such as feeding her and changing her diaper.

Thoughts of a possible second wave of infections and another nursery shutdown have been on her mind lately.

She doesn’t think her husband would offer her much help.

“I think I will have to take care of our child almost by myself again,” she said.

In two-income households, women tend to sacrifice their career more.

A woman in her 30s in Tokyo’s Minato Ward works as a freelance system engineer.

She canceled all her scheduled work in May and reduced her overall work hours to one-third of normal, so that she could care for her 4-year-old daughter and 2-year-old son, who stayed home due to the pandemic.

She and her husband, a company employee, had equally shared household chores and child rearing.

They decided to divide up child-rearing duties, with one in charge in the morning and the other in the afternoon.

Soon, however, both felt their work was significantly affected.

The husband's employer has implemented a merit-based system, and the government’s state of emergency would not be taken into consideration if his work volume decreased.

He makes more money than his wife.

She came to think, “In terms of job performance reviews and career, men are more likely to be affected when they are subject to certain restrictions by child care duties than women.”

“That’s why I had no choice but to limit my work hours,” she explained.

In the case of a 35-year-old male company employee in Tokyo’s Chuo Ward, it’s not that he did not want to help with the parenting.

“It’s because I cannot reduce my workload,” he lamented.

His 2-year-old daughter’s nursery shut down due to the pandemic. He and his wife both started working from home.

The situation caused both their work performances to suffer, prompting them to send their daughter to an uncertified child care facility.

His workplace has about 50 employees.

“If my job performance goes down because I take care of my child, nobody covers for me at work," he said. "I wonder if there was a way for me to balance work with child-rearing while working for a small company. And I still don’t have an answer for that.”

Persol Research and Consulting Co. conducted a survey in May on teleworking, in which about 40 percent of respondents with children said they “had a problem with taking care of children while working.”

Among those who have children at elementary school age or younger, about 60 percent said so.

In a 2016 survey by the internal affairs ministry, among families with children younger than 6, wives spent 7 hours and 34 minutes on household and child care duties every day. Meanwhile, husbands spent only 1 hour and 23 minutes on the same each day.

“This tendency remained the same during the coronavirus pandemic,” said Yuji Kobayashi, senior researcher at Persol, who was in charge of the May survey.

Yuiko Fujita, a sociology professor at Meiji University, is alarmed by such an unequal burden that women have carried during the pandemic. She is worried that it could negatively impact the women's careers and “make the existing gender economic gap even wider.”

(This article was written by Ananda Kokumai and Odaka Chiba.)