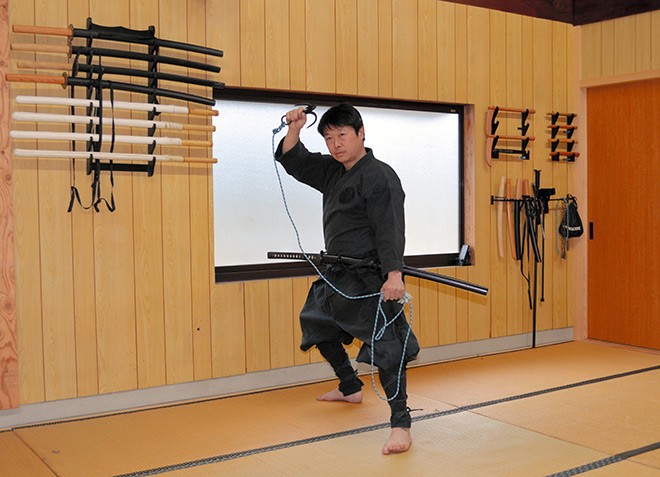 IGA, Mie Prefecture--A survivalist from Osaka Prefecture is the first person to make it through Mie University's rigorous graduate course specializing in ninja and their fighting techniques.

Genichi Mitsuhashi, 45, completed the two-year course in March, the only one of the three students enrolled at the same time.

"Mitsuhashi is a real role model for graduate students who study ninja," said Yuji Yamada, 53, a professor in the university's Faculty of Humanities, renowned for his research on the feudal-era undercover agents.

While studying at the institution located in Iga, the birthplace of Japan's ninja tradition, Mitsuhashi opened a dojo to teach disciples of his own and also also grows rice and vegetables to live an almost self-sufficient life.

"It has been a fulfilling two years because I lived in a mountainous farming village in Iga to study ninja and pursued my research in my own way," Mitsuhashi said.

But after getting into a few scrapes in South America and Africa, Mitsuhashi decided when he was 26 to beef up his self-defense skills and began taking classes at Bujinkan, a martial arts gym for the Togakushi-ryu school of ninja techniques and other martial arts. The experience sparked interest in Iga.

The Iga region had no ruling warlord until it was conquered by a large army led by Oda Nobunaga (1534-1582) during the Warring States period (late 15th to late 16th centuries).

This meant that there had been constant conflicts in the region, leading to the development of groups of armed farmers believed to have originated from “shugenja” ascetic hermits. They later became known as "ninja," according to experts.

Mie University has taken a serious approach to the study of ninja, setting up the International Ninja Research Center in Iga in 2017 and started offering the graduate school course in April the following year.

Mitsuhashi, who had been helping his family's building maintenance business in Osaka Prefecture, moved into the Iga region in spring 2018, where he was determined to study the relationship between ninja and farming villages in the mountains while living off the land.

He enrolled in Mie University's graduate school and bought a vacant two-story wooden house on land where he cultivates rice in paddies and grows vegetables in fields for his own use.

Mitsuhashi also repaired a warehouse on the premises and opened a dojo there in the fall of 2018 to teach ninja techniques and combat skills.

In February the following year, he started operating a "minpaku" private lodging service at his home.

Mitsuhashi attended graduate school two to three times a week to decipher old documents and study the true nature of ninja. He wrote his master's thesis on how ninja played a major role in managing mountain forests in the Iga region during the Edo Period (1603-1867).

"He couldn't have written his thesis unless he blended in with the local community," the professor said.

Having moved on to a Ph.D. program since April, Mitsuhashi said he has set his mind on using the ninja ways he has picked up as "regional resources" to revitalize the local community.

"I want to play a role in connecting local residents with tourists and other visitors. I hope I can help revitalize the region and its ninja-related sites by having minpaku users join local festivals and offering other measures," Mitsuhashi said.