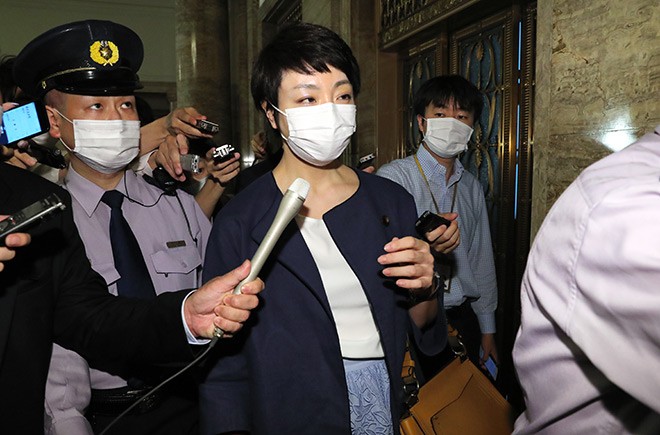 Anri Kawai, a Liberal Democratic Party lawmaker, is surrounded by reporters as she leaves the venue for the Upper House plenary session on June 12. (Takeshi Iwashita)

A former justice minister and his wife offered nearly 26 million yen ($242,000) in cash to about 100 people in Hiroshima Prefecture prior to the Upper House election last year in a suspected vote-buying scandal, investigative sources said.

Public prosecutors are making final preparations for charging Katsuyuki Kawai and his wife, Anri, with violating the Public Offices Election Law after the Diet session closes on June 17.

Most of the 100 people, many of them local assembly members in the prefecture, admitted to taking the cash from the couple during questioning conducted on a voluntary basis by the special squad of investigators with the Tokyo District Public Prosecutors Office, the sources said.

Kawai, 57, and Anri, 46, who won her first seat in the Upper House election in July 2019, have denied the allegations of vote buying during voluntary questioning by investigators.

According to the sources, Kawai is suspected of offering a total of 24 million yen to 95 or so people, including members of the Hiroshima prefectural assembly, support group and campaign office, in an apparent attempt to get them to gain her votes, between March, when Anri announced her candidacy, and July last year.

Anri also allegedly personally handed cash to around five people totaling 1.5 million yen to comply with the wishes of her husband, a member of the Lower House belonging to the ruling Liberal Democratic Party.

Some officials who worked for Anri’s campaign office have told investigators that Kawai was the architect of his wife's campaign strategy.

Investigators believe that Kawai orchestrated the scheme of trading cash for votes.

In January, investigators with the Hiroshima District Public Prosecutors Office launched a probe into the allegation that staff members who called out Anri’s name from campaign vehicles were paid double the limit stipulated under election laws.

They searched the couple’s offices and home in the prefecture as well as those in Tokyo.

Joined by their colleagues in Tokyo, Osaka and Nagoya into the investigation, prosecutors in Hiroshima in March arrested and indicted a man who served as policy aide to Kawai at the time of the election as well as an official aide to Anri on charges of breaching the Public Offices Election Law.

Both men are standing trial at the Hiroshima District Court.

Anri’s election result will be nullified if the court applies the guilt-by-association system when the official aide to Anri receives a suspended prison term or a stiffer sentence.

During the investigation into the two individuals, investigators obtained a copy of a list that showed that the Kawais doled out cash to a large number of people.

The special team of the Tokyo District Public Prosecutors Office effectively led the investigation into the couple, interviewing local assembly members and others since March.

In the Upper House election, the LDP’s prefectural chapter sought to rally behind Kensei Mizote, a veteran incumbent and former chief of the National Public Safety Commission, as the party’s sole candidate.

But the LDP headquarters in Tokyo opted to seek two seats up for grabs, also fielding Anri. Anri was elected, but not Mizote.

In interviews with The Asahi Shimbun, 31 people, assembly members included, admitted to having received cash totaling more than 7 million yen from the Kawais between March and July.

Some of the interviewees said that they believed that the money was aimed at buying their support for Anri in the Upper House election.

Kawai was elected to the Lower House seven times.

After serving as state minister of justice and special adviser to Prime Minister Shinzo Abe, he became justice minister in September.

But he stepped down from the post the following month after a weekly magazine reported on the vote-buying scandal involving his wife.