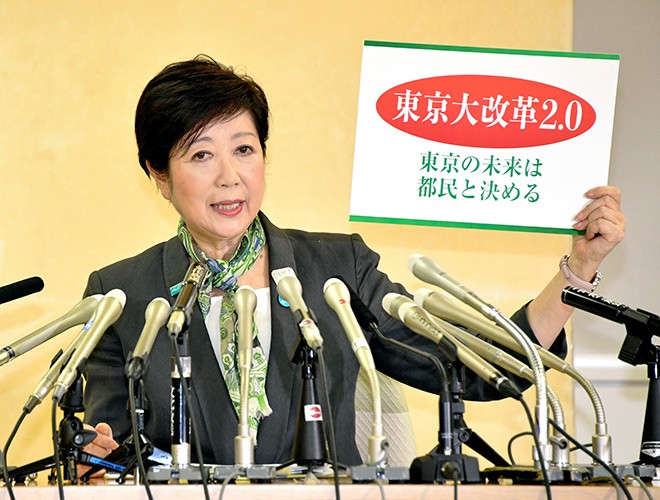 Tokyo Governor Yuriko Koike has said she will seek re-election in the gubernatorial election for which official campaigning starts on June 18.

Assessment of the four years of Koike’s governorship will likely be the biggest issue of contention.

Koike has made her presence amply felt through her response to the novel coronavirus crisis.

She asked businesses in Tokyo in early April to close their operations to help curb the spread of infections. At the same time, she said the metropolitan government would be paying its own “cooperation money,” instead of direct compensation, to businesses that comply.

When the central government extended a state of emergency in early May, Koike decided from the top down to provide additional cooperation money.

Still, she was able to take those initiatives only because of the fiscal strength of the Tokyo metropolitan government.

The total cost of its emergency response measures has topped 1 trillion yen ($9.32 billion). That has all but consumed the 900 billion yen or so in the metropolitan government’s public finance adjustment fund, which amounts to its “savings.”

The metropolitan government will inevitably face a drop in tax revenues due to the coronavirus crisis in the years to come. It will also have to bear additional costs associated with the postponement of the Tokyo Olympic and Paralympic Games.

Koike should present concrete policies as to what she would do in the event of another spread of COVID-19 infections and how she plans to get the metropolitan government’s finances back on their feet.

As a former newscaster, Koike has been a strong communicator of information and a skillful user of language, except that her desire to express herself as a “strong governor” showed through everywhere.

She was slow in having the capabilities of health care services strengthened and the availability of polymerase chain reaction (PCR) tests expanded. There is a strong impression that the public health care system of Tokyo barely escaped collapse thanks only to the strenuous efforts of front-line workers.

The metropolitan government’s COVID-19 response should be reviewed by scrutinizing every single fact without caving in to an impressionistic approach.

Four years ago, Tokyo’s voters hoped Koike could carry out unfettered reforms after her two immediate predecessors had stepped down midway through their terms because of scandals.

Koike has had an ordinance adopted for preventing secondhand smoke more stringently than required by legal regulations. She has also reduced the number of children on waiting lists for day care centers by strategic budget allocations. These could be counted as her positive achievements.

However, it remains questionable whether Koike, who criticized past administrations of the metropolitan government for being a “black box,” has ever been sincere in being held accountable on her own.

One example is the longstanding controversy over the relocation of Tokyo’s Tsukiji fish market to the Toyosu district, which took place in 2018.

Defects in soil contamination countermeasures at the Toyosu site and a nontransparent nature of the relocation talks held under the governorship of Shintaro Ishihara both came to light after Koike took office. But her stance on how to redevelop the former Tsukiji site has been anything but consistent.

She abruptly came up with a slogan, “Tsukiji should be preserved, Toyosu should be used,” immediately before the metropolitan assembly election of 2017. Those words were only said, never to be followed through on.

Koike defiantly said no documents are available that would shed light on how the policymaking process took place under her governorship on the market relocation issue. She has yet to provide persuasive explanations on the matter.

Koike stopped sending messages to annual memorial services held for the Koreans and Chinese massacred following the Great Kanto Earthquake of 1923, which revealed her unwillingness to face up to the negative side of history. She has never given a clear-cut explanation on this issue, either.

Tokyo is facing ever more difficult challenges, including a need to prepare for disasters and to cope with an aging population.

Koike’s signature approach consists in gathering support by staging a fight against “enemies” she has singled out, such as the Liberal Democratic Party caucus in the metropolitan assembly, the Tokyo Organizing Committee of the Olympic and Paralympic Games, and the central government.

The coming election is an opportunity for assessing the extent to which that approach will remain effective in operating the metropolitan government in the years to come.