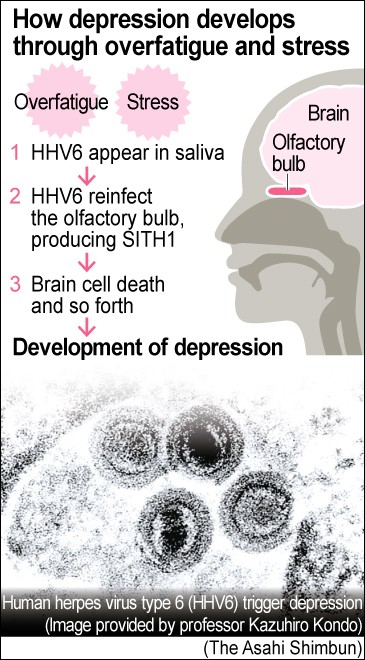 A research team has confirmed that a virus-derived protein holds the key to determining why overfatigue and major stress can lead to depression.

The researchers, from the Jikei University School of Medicine, discovered that the protein dramatically increases the risk of depression. They said that people who have this protein are 12.2 times more likely to develop this mental health problem.

“The fact that overfatigue leads to depression seemed to be self-evident, but actually it has not been verified until now,” said professor Kazuhiro Kondo, who specializes in virology at Jikei University, and was a leading researcher on the team. “We were able to uncover a part of the mechanism of how depression is developed, and we hope that our findings will help reveal the whole mechanism of depression.”

The research team hopes that its findings will lead to developing a blood examination method for diagnosing depression.

The team's findings were published on June 11 in online science magazine iScience, which was established by the U.S. academic publisher Cell Press.

Kondo, who has studied the relationship between fatigue and viruses for many years, had discovered that the human herpes virus type 6 (HHV6) increases sharply in saliva when fatigue builds up.

HHV6 is the virus that causes exanthema subitum, a disease in infants. Almost all people are infected during their infancy, and after that, they carry the latent virus in their bodies.

Normally, the virus remains dormant, but when the body is fatigued, HHV6 is awakened and is present in saliva to escape from the weakening host. Some of the virus reaches and infects the olfactory bulb, the center in the brain connected to the sense of smell, by flowing up from the mouth to the nose.

The research team determined that if reinfection occurs, SITH1 proteins are produced in the olfactory bulb. By their production, excessive calcium flows into brain cells and kill them, which was discovered through experiments using cultured cells and mice.

Furthermore, by the cell deaths in the olfactory bulb, nerve regeneration is restrained at the hippocampus, which controls human memory.

The team conducted an experiment called “depression model,” in which researchers measure the time it takes for mice placed under stress to give up escaping from the situation. Mice that are made to produce the protein at their olfactory bulb by researchers give up earlier than normal mice, and when they were given an antidepressant drug, they recovered to the level of normal mice.

In addition, the team studied the presence of antibodies, which prove the existence of the protein, among 166 blood samples. They were confirmed in 80 percent of patients with depression. Also, those patients have much more of the protein than healthy people.

From these results, the team deduced how depression is developed through overfatigue and stress: HHV6 appears in saliva through overfatigue and so forth; the olfactory bulb is reinfected, producing SITH1; due to SITH1, the state of brain cells changes dramatically at the olfactory bulb, hippocampus and other brain areas; and hypobulia, or lowered ability to make decisions and act, and other symptoms occur.

Kondo discovered the SITH1 protein more than 10 years ago. He playfully named it after the villain Dark Lord of the Sith in the "Star Wars" science fiction film series as it “takes people inside the dark side.”

He came to realize that the SITH1 protein played a role in increasing stress as the more he studied it and holds the key to how depression develops.

“Stress can cause anxiety and fear. These are important causes to developing depression,” Kondo said. “When I realized that, the wise Yoda’s famous words, 'Fear is the path to the dark side,' came to mind.”

Kondo was informed that his latest paper was accepted for publication by iScience on May 4, which is coincidentally recognized as “Star Wars Day.”