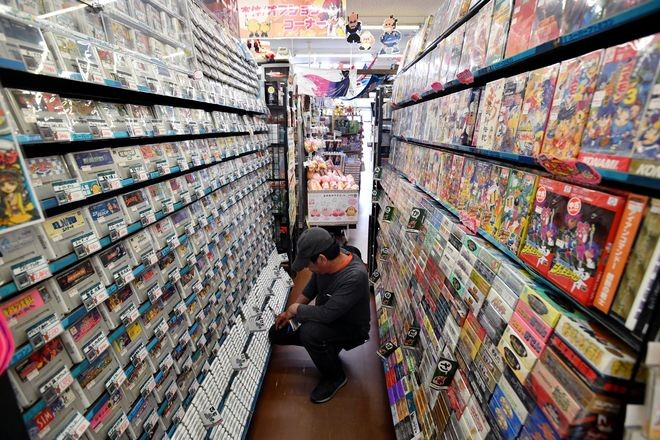 OSAKA--Retro is back in a big way as residents here load up on used video games and consoles popular in the late 1980s and early '90s to amuse themselves at home until the new coronavirus scare passes.

The surge in interest in "old" software may even herald a new lifestyle norm now that the state of emergency has been lifted and many people still choose to stay home.

Retailers of used video game stores in "Denden Town," Osaka's equivalent to Tokyo's renowned Akihabara district of discount outlets for electronic goods, have witnessed a sharp increase in sales of Nintendo Co.'s Super Nintendo Entertainment System (SNES), which was released 30 years ago, as well as its Nintendo 64 successor, other home video game consoles and their software cartridges.

Located in the Nipponbashi district of the city's Naniwa Ward, Denden Town is one of the largest centers for electronic goods in western Japan and also known as a sanctuary for "otaku" geeks in Osaka.

Also on display is the Sega Genesis released by Sega Enterprises Ltd. (present-day Sega Corp.) in 1988 and SNK Corp.'s Neogeo that came out in 1991.

According to Super Potato, the surge in demand for retro games began in or around March after public schools in Osaka Prefecture were closed at government request to thwart the spread of the virus. Sales on an annual basis have risen 30 to 40 percent since then.

The customer base has also changed.

Before the new coronavirus hit, about 90 percent of Super Potato's customers were mainly foreign visitors who were hard-core game fans. But now families are the main customers.

"It seems that children are buying games that had been popular back in the day, rather than something niche," said a sales clerk.

For beginners, the store recommends classic video game series put out for the Nintendo Entertainment System (NES), SNES and other consoles, including "Dragon Quest," "Mega Man," "EarthBound" and "Mana."

"The ambience created by the pixel art is great," the staff member said.

Yutaka Ishii, president of the Japan Retro Game Association, a nonprofit organization based in Izumi, Osaka Prefecture, and founded to preserve classic video games, is in no doubt that the COVID-19 crisis played a major role in creating growing demand for retro games.

Ishii, 47, noted that the supply chain was disrupted by the pandemic, making it difficult for gamers to purchase the Nintendo Switch and other latest home gaming consoles.

"It's nostalgic for parents and new for their children," he added. "New games are good, but I hope retro games are also enjoyed."