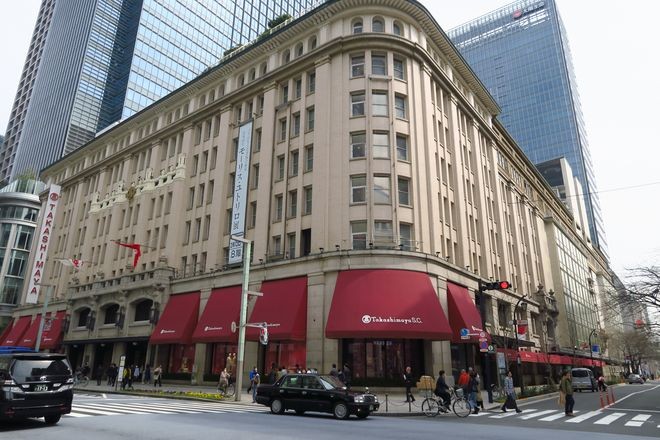 Nihonbashi Takashimaya is a long-established department store. Even if you’re not keen on shopping, it’s worth visiting to see the building’s gorgeous architecture and interiors. (Photo by Lisa Vogt)

"Whenever I see wrapping paper with pink roses printed on it, it reminds me of Christmas,” my best friend says every time we’re in Nihonbashi, “because when I was a child, Santa Claus always brought gifts wrapped in Takashimaya wrapping paper.”

I didn’t know that Takashimaya had a branch in the North Pole. Or was it somewhere in Lapland that he lives? Hmm, I wonder which it is. And while we’re at it, is it Nihonbashi or Nihombashi? I’ve seen both, and it probably has something to do with the different ways of Romanization and whether the sound is followed by a plosive sound like “b” or “p,” but please don’t quote me on this.

In 2009, Nihombashi Takashimaya became the first department store to be designated as an Important Cultural Property of Japan. Nippon Life Insurance erected the building in 1933, and Takashimaya was a tenant.

It was named Nihon Seimei Kan, and in 1939, 1952, 1954, 1963 and 1965, the structure was expanded and floor space increased until it occupied an entire block. The original building was designed by Teitaro Takahashi (1892-1970), whose other works include the Gakushi Kaikan in Kandanishikicho and the Marquis Maeda Residence in Komaba Park.

Additions were made by Togo Murano (1891-1984), who designed Nissay Theater in Hibiya and Yomiuri Hall in Yurakucho, Tokyo. Look up at the building from the Sakuradori street side, and you’ll see the difference in architectural styles.

The department store was the talk of the town when it installed air conditioners on all floors, and from 1950 to 1954, “Takako,” an elephant, lived on the roof. She traveled from Thailand to Shimonoseki and then was taken to Shiodome and paraded through Ginza to Nihonbashi.

If she were still with us today, I’d love to interview her. I’ll bet she has a bunch of stories to tell. There’s a humongous elephant-shaped structure atop the department store in honor of Takako, but if it’s not pointed out to you, you probably wouldn’t see it.

The first-floor ceiling used to have gorgeous chandeliers, but the metal was removed and donated for the war effort. Today, the lighting is simple and looks like something you’d find inside a regular Japanese home.

Ornamental motifs reminiscent of shrines and temples adorn the little nooks and crannies, and if you look carefully, you’ll see fossilized ammonites in the marble stairways. Rare elevator attendants take you to your desired floor in antique elevators.

(The author visited the department store on March 13.)

* * *
This article by Lisa Vogt, a Washington-born and Tokyo-based photographer, originally appeared in the May 24 issue of Asahi Weekly. It is part of the series "Lisa’s In and Around Tokyo," which depicts the capital and its surroundings through the perspective of the author, a professor at Meiji University.