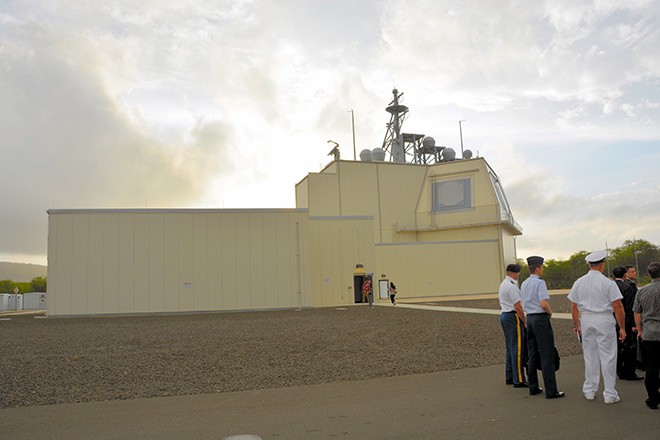 The land-based Aegis Ashore system was to have been the third prong in defending Japan against ballistic missiles from North Korea.

However, Kono told reporters on June 15 that he had given instructions to stop the deployment process because of the huge extra expenses and time needed to ensure that rocket boosters used to launch the interceptor missiles would not fall on residential areas.

Kono said he had obtained the consent of Prime Minister Shinzo Abe to suspend the deployment process. However, a formal decision on the matter would have to await discussions within the National Security Council.

The Abe administration decided in December 2017 to acquire the U.S.-developed Aegis Ashore system for deployment to two sites on the main island of Honshu to protect the entire archipelago from missiles fired from North Korea.

But the ministry subsequently admitted that it had erred in calculating various factors of the Araya site when it compiled a report about its feasibility.

That embarrassment led the ministry to drop the Araya site from consideration and search for another suitable location in eastern Japan.

Meanwhile, residents in Yamaguchi Prefecture, on the western tip of Honshu, had long raised concerns about a rocket booster falling outside of the Mutsumi training area.

Defense Ministry officials had previously stated said that a buffer zone of about 700 meters would be established between the Aegis Ashore radar and missile launching equipment and the nearest private homes.

They also said that controlling the trajectory of the interceptor missile would make the rocket booster fall within the Mutsumi training area site.

Defense Ministry officials tried to reassure Yamaguchi residents that the Aegis Ashore system would be deployed and operated in a safe manner in their backyard.

But according to Kono, talks between ministry and U.S. officials this year led to the conclusion that not only computer software but also the rocket booster itself would have to be revised to ensure that it fell with certainty within the training area site.

Speaking at the June 16 session of the Lower House Security Committee, Kono said one cost estimate for tinkering with the rocket booster was 200 billion yen ($1.9 billion), and the correction would take about 10 years.

Kono said that such costs and time would go solely toward revising the rocket booster and would not lead to an improvement in the capability of the interceptor missile itself.

“I decided that it would not be a rational choice to make such revisions,” Kono said.

The defense chief told reporters on June 15 that for the time being efforts to maintain Japan’s missile defense system would be concentrated on the Maritime SDF’s Aegis destroyers carrying Standard Missile-3 (SM-3) interceptor missiles.

The many problems that hit the Aegis Ashore system stemmed in part from the manner in which it was approved by the government.

Normally, when new defense equipment is acquired, it is a bottom-up process with the SDF making requests and coordinating with local governments about the possibility of installing the new equipment in their jurisdictions.

Once the Defense Ministry gives the go-ahead, the matter is then brought to the prime minister’s office for final approval.

However, in the case of the Aegis Ashore system, it was a top-down decision from the very beginning.

Concerns were raised within the Defense Ministry and SDF about that decision process.

One ministry official explained that they were ordered to visit the candidate sites for deployment to explain the system, but they themselves were not entirely sure of the capabilities or risks associated with the Aegis Ashore system.

Others said they realized from the start that missile parts from the interceptor missile would likely fall on residential areas if it was used to shoot down a ballistic missile.

Questions were also raised about the cost-benefit performance of the Aegis Ashore system. One minimum estimate for the costs associated with installing the system and maintaining it for 30 years was about 450 billion yen.

Even with that enormous expenditure, defense experts pointed out that both China and North Korea were developing ballistic missiles that would be capable of avoiding detection of the Aegis Ashore system and reaching their targets.

A high-ranking GSDF officer said the Aegis Ashore was not a cost-effective defense system.

Japanese officials were waiting for a U.S. reaction to Kono’s decision because not having the Aegis Ashore system in Japan would affect Washington’s own missile defense plans.