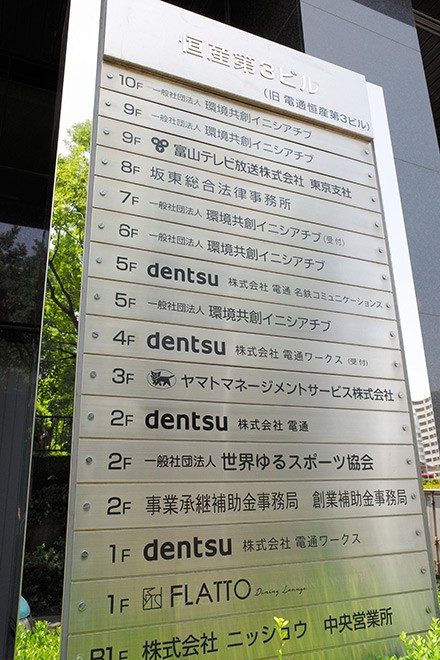 Advertising giant Dentsu Inc. is in the public spotlight following revelations it was subcontracted to handle a slew of government programs worth billions of yen, fueling suspicions of shady business dealings.

The latest revelation concerns a program that offers reward points to holders of My Number tax and social security identification cards when making cashless shopping purchases. The work was subcontracted to Dentsu via the Sustainable Open Innovation Initiative (SII), an entity contracted with administrative work for the program.

The SII, established in February 2011, handled a range of operations concerning government subsidy and other programs, in energy and environment sectors that were awarded by the Ministry of Economy, Trade and Industry and other government organizations.

The My Number point program, which will be valid over seven months from September, is aimed at stimulating personal consumption. It was compiled by the Ministry of Internal Affairs and Communications.

SII-member companies include powerful industrial lobbies, such as the Petroleum Association of Japan and the Federation of Electric Power Companies of Japan, as well as Dentsu, Transcosmos Inc. and other businesses that were also subcontracted for the coronavirus relief package.

The relief aid program is targeted at small and midsize companies that have been at the center of heated Diet debate. The Service Design Engineering Council, which was founded by Dentsu and other companies, was called on to implement the relief program, but it outsourced the work to tiers of subcontractors.

This led opposition parties to accuse the council of siphoning off taxpayer money without providing any meaningful input, raising questions about the total cost of the project.

According to the internal affairs ministry, the SII was handed 35 billion yen by the government for carrying out the My Number point program.

The SII will be left with 15.7 billion yen after the payment of subsidies is made to operators of the cashless settlement system.

Of the 15.7 billion yen, 13.9 billion yen will be paid to Dentsu as fees for subcontracting the program.

The My Number point program was also subcontracted to other entities, including Nomura Research Institute, a leading player in information systems.

The arrangement to outsource the government initiative to those entities will leave the SII with a net profit of about 400 million yen.

For its part, Dentsu farmed the administrative work of the program to Dentsu Live Inc., a group company, and other entities.

From Dentsu Live, call center and screening services will be subcontracted to other companies, including Transcosmos, Dai Nippon Printing Co. and Hitachi Ltd.

The SII was the only entity that submitted a bid when the government announced a public tender for the My Number point program last Dec. 6. On Dec. 26, the SII was selected to implement the program.

“We applied for the program because we felt we could capitalize on our past experiences,” an official with SII told The Asahi Shimbun in an interview.

The SII landed a deal with the Tokyo metropolitan government for clerical work for its initiative to reward points to residents who purchase energy efficient electric home appliances.

According to the Ministry of Economy, Trade and Industry, the SII subcontracted 35 ministry programs worth about 16 billion yen to Dentsu over the past three years.

Hiroshi Kawauchi, a Lower House lawmaker of the main opposition Constitutional Democratic Party of Japan, labeled the operations at the Services Design Engineering Council and the SII as “opaque” at a session of the Lower House committee on economy, trade and industry.

(This article was written by Tomoya Fujita and Hiroki Ito.)