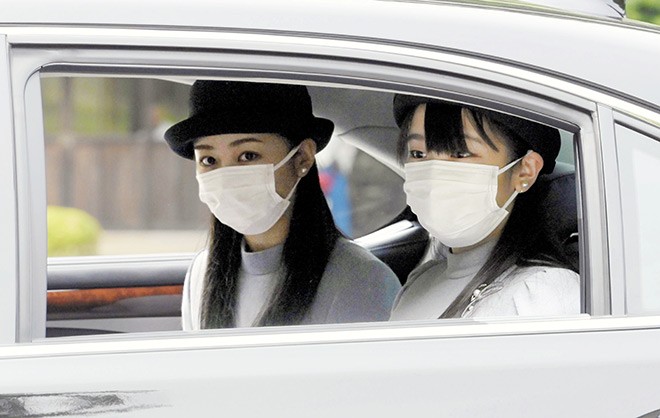 Princess Kako, left, and Princess Mako leave after attending a ceremony to commemorate the 20th anniversary of the death of Empress Kojun, their great-grandmother, held at the Musashino East Mausoleums in Hachioji on June 16. (Pool)

Ceremonies were held at the Imperial Palace and the imperial graveyard on the outskirts of Tokyo on June 16 to commemorate the 20th anniversary of the death of Empress Kojun, grandmother of Emperor Naruhito.

Empress Kojun was the wife of Emperor Hirohito, who is posthumously known as Emperor Showa.

A rite held at the Imperial Palace was attended by Naruhito, his wife, Empress Masako, Naruhito’s younger brother, Crown Prince Fumihito, Crown Princess Kiko and other members of the imperial family.

Naruhito gave a speech during the ritual.

Princess Mako and Princess Kako, the daughters of Fumihito and Kiko, took part in the ceremony held at the Musashino East Mausoleums for Empress Kojun in the Musashi Imperial Mausolea Grounds in Hachioji in western Tokyo.

The princesses bowed after a messenger sent by Naruhito read a speech on his behalf there.

It was the first outing by the two sisters related to their official duties or an imperial rite since April.