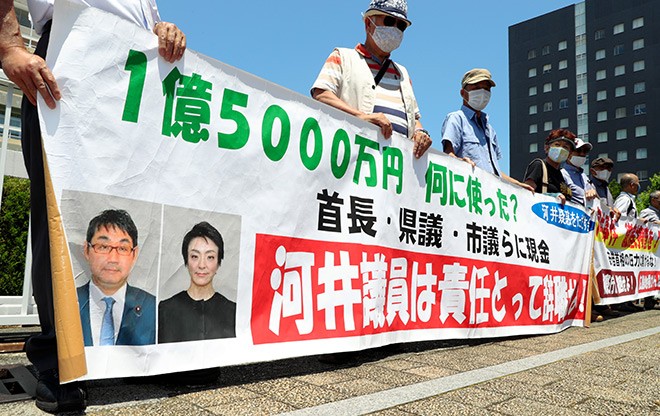 Members of a citizens' group stand in front of the building housing the Hiroshima District Court before the June 16 conviction of an official aide to Upper House member Anri Kawai. (Koichi Ueda)

Rookie Upper House member Anri Kawai faces the prospect of being forced out of the Diet after a top aide was convicted on a vote-buying charge related to her election victory in July 2019.

The legal problems facing Anri, 46, and her husband, former Justice Minister Katsuyuki, 57, will likely intensify in the coming weeks.

The Hiroshima District Court on June 16 found Hiroshi Tatemichi, 54, guilty of violating the Public Offices Election Law by exceeding the legal limit in payments given to staff who rode in campaign cars and shouted out the name of the candidate.

Tatemichi, who was an official aide to Anri, was given an 18-month prison sentence, suspended for five years.

Prosecutors can seek to invalidate Anri’s Upper House election victory if the sentence against Tatemichi is finalized after a completion of the appeals process.

On June 17, sources in the ruling Liberal Democratic Party said that the Kawais had submitted papers asking that they be allowed to leave the ruling party.

However, the sources said the couple had no intention of resigning their Diet seats. Katsuyuki is a Lower House member.

Investigative sources said the Kawais are under investigation on suspicion of handing out a total of 26 million yen ($242,000) to about 100 local assembly members in Hiroshima Prefecture, seeking their support for Anri’s campaign in the 2019 Upper House election.

If the Kawais are arrested, LDP rules call for their expulsion from the party. But by removing themselves from the party on their own volition, the Kawais leave open the possibility of someday returning to the LDP fold.

The sentencing was a focal point in Tatemichi’s trial, considering its potential implications for Anri’s political career.

Prosecutors asked for an 18-month prison sentence, arguing that Tatemichi played a key role in Anri’s campaign and handed out the payments to staff along with Shinsuke Takaya, 44, a former policy aide to Katsuyuki.

Takaya is being tried separately on similar charges.

Tatemichi at one time also served as an aide to Katsuyuki before taking on the position of official aide to Anri.

Tatemichi’s lawyers argued that their client was only following the instructions of the campaign office about the cash payments. They also said that since Tatemichi served in a subservient role, he should only be fined for abetting the crime.

Prosecutors cannot use the penalty of a fine to try to invalidate Anri’s election victory.

The district court said that while Tatemichi organized the campaign speeches and appearances, it was obvious that the intentions of both Katsuyuki and Anri were being followed about how the campaign should be run.

The court found that Tatemichi carried out the specific tasks of the campaign, such as organizing campaign car routes and overseeing campaign staff on a daily basis.

He also gave specific instructions about the amounts of cash that were handed out to the campaign staff, the ruling said.

Tatemichi knowingly broke the law and damaged fairness in a national election by trying to conceal the illegal payments by asking campaign staff to write up two receipts for accepting the payments, the ruling said.

But the court decided to suspend Tatemichi’s sentence on grounds he was partly following the intentions of the campaign office in making the illegal payments.

When prosecutors were looking into the allegations against Tatemichi, they came across a list of payments made to Hiroshima local assembly members by the two Kawais.

The Kawais have denied trying to buy votes under voluntary questioning by prosecutors.

But sources said prosecutors are seeking to charge the two Kawais once the ordinary Diet session ends on June 17. Lawmakers cannot be arrested while the Diet is in session.

Katsuyuki has long been a close associate of Prime Minister Shinzo Abe and Chief Cabinet Secretary Yoshihide Suga. Abe appointed Katsuyuki as justice minister in a Cabinet reshuffle in September 2019, but he was forced to resign after reports surfaced about the illegal cash payments during his wife’s election campaign.

(This article was compiled from reports by Hiraku Higa, Mizuho Morioka, Tatsuro Kawai and Akina Nishi.)