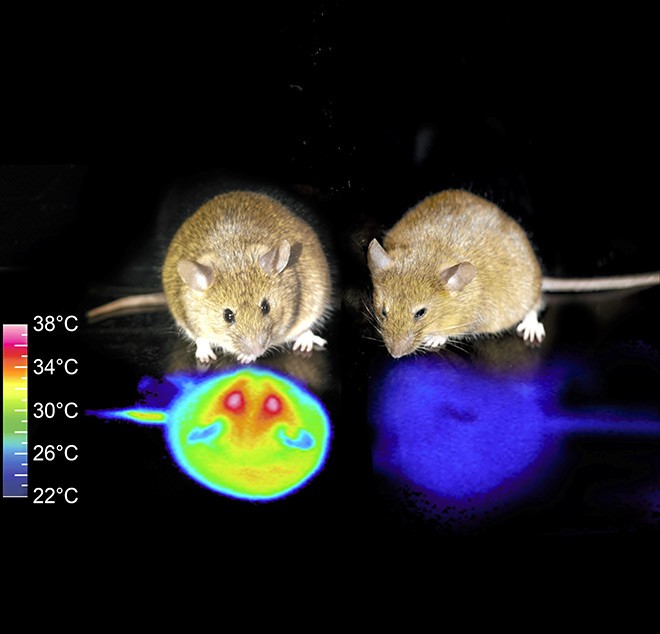 The body temperature of a mouse, right, in a state of “hibernation” is indicated in blue in thermography, meaning it is lower than that of the other, left, in a normal state. (Provided by University of Tsukuba)

Scientists announced they induced a state of artificial hibernation in mice, potentially paving the way for humans to one day go into some sort of hibernation for space exploration.

Researchers from the University of Tsukuba and the Riken research institute said their artificial hibernation discovery could be adopted in the future for human use. That might lead to advances in areas of medicine such as emergency care and organ preservation, or for use in long space flights where there is not enough food and oxygen--just like in science fiction.

“There are many diseases in which demand for oxygen and nutrition outstrips supply,” said Takeshi Sakurai, a professor of pharmacology at the University of Tsukuba who was involved in the study.

“Tissue is further damaged by the time the patients with such diseases can receive treatment. But if they are induced into hibernation, they can be treated before further damage takes place.”

Mammals normally maintain a constant body temperature. But some hibernate in cold seasons, or when they are starving due to food shortages, by slowing their metabolism and lowering body temperature to a level that would normally cause tissue damage.

Chipmunks and brown bears hibernate like this, but little is known about how they are able to do it.

The researchers studied a set of special neurons in the hypothalamus region of mice brains. They said those neurons regulate body temperature and metabolism.

In their study, the researchers injected certain chemical substances into the brains of mice to stimulate those neurons. That caused their body temperatures and oxygen consumption levels to decrease significantly. Their metabolism remained stable as they were induced into a state similar to hibernation.

With room temperature set at 23 degrees, their body temperatures dropped from a normal 37 degrees to 24 degrees within just a few minutes. Their oxygen consumption decreased to around one-eighth the normal level. The mice fell into a state somewhere between sleeping and being awake and would react to being poked.

Their body temperatures and oxygen consumption gradually returned to their normal levels over time.