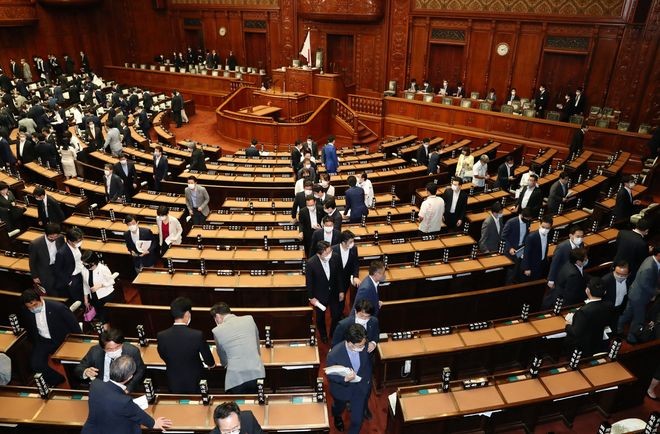 Lawmakers leave the Lower House chamber after the regular Diet session is closed on June 17. (The Asahi Shimbun)

The ruling camp’s decision to close the regular Diet session on June 17 as scheduled without extending the term amid continued concerns about the new coronavirus reflects the Abe administration’s desire to avoid further opposition attacks on its policy failures.

Prime Minister Shinzo Abe and his top aides were clearly unwilling to continue facing questions at the Diet about their responses to the outbreak and other issues. Abe put a higher priority on rebuilding his troubled leadership than on fulfilling his responsibility to explain his policy decisions and actions to the people.

The government claims that the massive reserve fund included in the second supplementary budget for this fiscal year will allow it to make swift policy responses to any unpredictable problems.

Given the lack of transparency in the government’s plan to contract out the administrative work for a program to help cash-strapped businesses survive the current crisis, however, it is obvious that the administration’s policy actions need to be monitored and checked regularly by the Diet.

NO PROGRESS TOWARD ADDRESSING SCANDALS

There was no time for the Diet to question the government’s decision to halt the plan to introduce a U.S.-made Aegis Ashore missile defense system, announced abruptly near the end of the Diet session. This underscored afresh the Abe administration’s inveterate tendency to avoid debate on sensitive policy issues and disregard the importance of the role of the Diet.

Before the nation became preoccupied with responding to the coronavirus outbreak, the focus of the regular Diet session was on a series of scandals that had hit the administration.

They include allegations that Abe abused the annual cherry blossom viewing parties he hosted for his personal gain and a bribery scandal concerning Abe’s policy initiative to introduce casino-centered integrated resorts into Japan. The casino scandal resulted in the arrest and indictment of Lower House lawmaker Tsukasa Akimoto, who was appointed by Abe as senior vice minister at the Cabinet Office in charge of IR projects, for allegedly receiving bribes from a Chinese company seeking to operate a casino in Japan.

The administration has also been struck by an election law scandal involving a top aide to rookie Upper House member Anri Kawai and her husband, former Justice Minister Katsuyuki Kawai, and allegations concerning a dubious sale of state-owned land to Moritomo Gakuen, a private school operator linked to Abe’s wife, Akie, which drove a Finance Ministry official into suicide.

Notes and the will left behind by the official were later released.

There has been no notable progress toward clarifying the allegations, raising serious doubt over the credibility of the administration. But the Diet session became dominated by challenges posed by the public health crisis.

While dealing with an outbreak of such an unknown virus inevitably involves a trial-and-error process, many Japanese seem to view the series of policy decisions made by the Abe administration in handling the crisis as a chain of delayed responses to the changing situation.

Many political pundits say the administration was slow to take actions to contain the infection partly because Abe was concerned that strong measures could have serious repercussions on Chinese President Xi Jinping’s scheduled--and later canceled--state visit to Japan in the spring.

The administration was also concerned about the negative impacts on the 2020 Tokyo Olympics and Paralympics, which have been postponed to next year, as well as on local economies heavily dependent on foreign tourists visiting Japan.

It is quite doubtful whether the administration has made detailed records about its policy responses to the pandemic that are vital for later reviews and assessments of the actions.

Despite its characterization of the outbreak as a “historic emergency situation,” the Abe administration has failed to keep formal minutes of the meetings of the expert panel advising the government on its responses to the COVID-19 outbreak.

Records of proceedings at special meetings of the prime minister and key Cabinet members responsible for the government’s responses to the crisis, where they effectively make related policy decisions, do not include these top policymakers’ remarks. These facts speak volumes about the administration’s lack of commitment to solid management of official documents and adequate information disclosure.

Unlike lockdowns imposed in many other countries, the restrictions on outings and business operations in Japan are based only on “requests” from the government and lack legal enforceability supported by punishment for violations. Public trust in the administration is crucial for the success of this unique approach, which depends on voluntary efforts by a broad range of individual citizens.

But Abe’s efforts to communicate his policies to the public have been insufficient, and his habit of reading prepared texts instead of speaking in his own words has not helped get his messages out to the public.

Abe’s initiatives included distributing face masks to all households amid a serious shortage and sharing a video of himself lounging on a sofa with his dog, along with a message telling people to stay at home, in response to popular musician Gen Hoshino, who uploaded a video of himself singing about dancing indoors and invited people to reciprocate.

Both of Abe's actions, based on advice from a small number of close aides, only impressed upon the public how divorced he is from the people’s feelings.

While the administration’s long-criticized evil tendencies hobbled its effective handling of the pandemic, there have been unusual cases of the administration being forced to drop policy initiatives that it previously would have forcibly pushed through.

One is its decision to give up enacting legislation to give the government the discretion to extend the legal retirement ages of top public prosecutors.

The legislative initiative provoked a wave of protests in social media and prompted a group of retired top prosecutors led by former Prosecutor-General Kunihiro Matsuo to submit a position paper expressing opposition to the revision to the Justice Ministry.

The controversial bill to revise the Public Prosecutors Office Law was discarded on June 17 as the Diet session ended. If the administration intends to make sincere responses to the public opinion, it should give up on this dubious initiative altogether.

Another notable change in a policy decision concerns the centerpiece of the government’s package of measures to ease the economic impacts of the outbreak.

It retracted the Cabinet decision to provide 300,000 yen ($2,800) to families suffering from falling incomes, which did not go down well with the public, and then, in response to a strong request from Komeito, the junior coalition partner of the ruling Liberal Democratic Party, switched to handing out 100,000 yen in cash to every resident.

The Abe administration has lost much of its once strong political momentum, which was supported by his dominant political power and high approval ratings. But it is too early to predict that his weakened power base will lead him to adopt a humbler approach to governing the nation.

POLICY DECISIONS SHOULD NOT BE BASED ON MISPLACED PRIORITIES

Abe is in his eighth year in office since he returned to power, with a little more than a year left until the end of his term as the LDP president.

After leading the ruling coalition to a major victory in the Upper House election last year, Abe tried to accelerate his long-cherished ambition to amend the Constitution. But no wave of public support for his efforts emerged.

The Commissions on the Constitution of both houses did nothing to promote the cause during the latest Diet session but hold just one session of free discussions.

Abe’s efforts to move ahead Japan’s negotiations with Russia over a bilateral peace treaty by leveraging his personal relationship with Russian President Vladimir Putin have produced no progress.

Whether the Tokyo Olympics will be held next year will depend on an end to the pandemic.

Abe should not be criticized for trying to leave some legacies of his long rule. What he should focus on at the moment as this nation’s leader, however, is the colossal challenge of keeping the virus under control while resuscitating the moribund economy.

The remaining restrictions on cross-prefecture movements and operations of certain types of entertainment facilities, such as bars and clubs that provide companionship, are to be lifted on June 19.

With the threats of a possible second and third wave of infections looming on the horizon, the Abe administration needs to put the top policy priority on efforts to safeguard people’s lives and livelihoods and secure the health of the nation’s social and economic systems.

The ruling and opposition camps have agreed to hold weekly special committee sessions in both houses even while the Diet as a whole is in recess.

If Abe wants to regain the public's trust, he needs to answer questions at these sessions to clarify all the allegations against his administration.