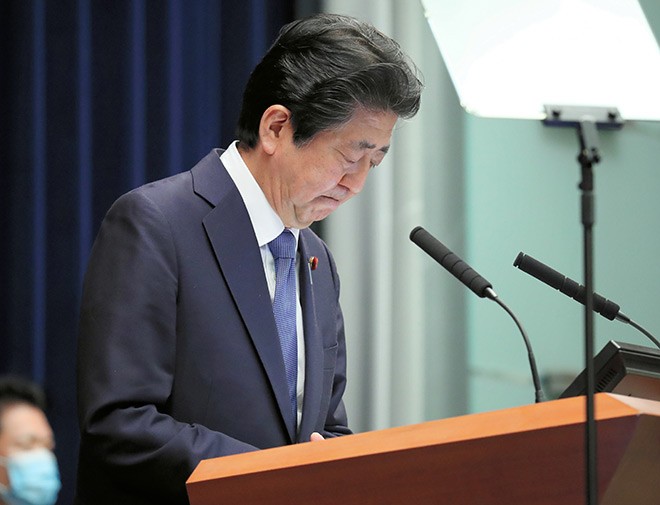 Even Prime Minister Shinzo Abe showed that he understood the gravity of the latest scandal to hit his administration.

Abe held a news conference on June 18, as he usually does after the conclusion of an ordinary Diet session.

But unlike his previous news conferences, the prime minister started with an apology over the arrests earlier in the day of Lower House member Katsuyuki Kawai, 57, and his wife, Anri, a 46-year-old Upper House member, on suspicion of vote-buying.

“I am well aware of the responsibility I bear for having once appointed (Katsuyuki) as justice minister,” Abe said. “I offer my deepest apologies to the public.”

Norihisa Tamura, a Lower House member of the ruling Liberal Democratic Party, called the arrests of the Kawais “unprecedented” and said the case would only “lead to public distrust of the political sector.”

The arrests of the Kawais came at a time when the support rate for the Abe Cabinet has plunged over the government’s handling of the novel coronavirus outbreak and its apparent attempt to promote an ally to prosecutor-general.

Abe is no stranger to scandal. But he has largely survived previous controversies after repeatedly denying any involvement in the matter.

However, Abe’s close connections to the Kawais cannot be denied. The prime minister was also directly involved in Anri’s campaign in the July 2019 Upper House election, where the suspected vote-buying took place.

The couple allegedly distributed a total of 25.7 million yen ($240,000) to 94 local assembly members and others in Hiroshima Prefecture as a way of having them round up votes for Anri, who won her first seat in the Diet in that election.

They denied any wrongdoing during voluntary questioning by prosecutors, sources said.

Many in the LDP speculated that Katsuyuki was chosen as justice minister in September 2019 because of his close ties to such powerful politicians.

However, Katsuyuki lasted only a little more than a month in his first Cabinet post. He was forced to resign after a weekly magazine reported on possible irregularities committed by the campaign staff working for Anri in her Upper House election bid.

Anri was chosen to run in that election because of the strong support shown by both Abe and Suga.

The LDP already had an incumbent seeking re-election from the Hiroshima prefectural district. But LDP headquarters in Tokyo pushed to have a second candidate run in an attempt to monopolize the seats in that prefecture.

Anri was picked as that second candidate.

Both Abe and Suga appeared at campaign events on Anri’s behalf during the summer 2019 Upper House election.

Some within the LDP said Abe pushed so hard to have Anri run because of his “personal grudge” against the LDP incumbent in Hiroshima Prefecture, Kensei Mizote.

When the then Democratic Party of Japan was in control of the government, Mizote held a news conference in which he described Abe as “someone from the past.”

Abe had resigned as prime minister a few years before the DPJ took over the government.

In addition, LDP headquarters gave Anri’s campaign an unheard-of amount of 150 million yen before the 2019 Upper House election. Most candidates only receive about 10 percent of that figure.

Mizote lost his seat in the election.

Prosecutors will now look into whether the money from LDP headquarters was used for the cash payments that were distributed to nearly 100 individuals in Hiroshima Prefecture.

Opposition party lawmakers were preparing to pounce on Abe over the latest political scandal.

Yukio Edano, head of the opposition Constitutional Democratic Party of Japan, said Abe’s judgment must be questioned since he appointed a justice minister who has now been arrested.

Yuichiro Tamaki, chief of the Democratic Party for the People, said the LDP would also have to explain why it gave Anri’s campaign such a large amount of cash.

(This article was written by Yuichi Nobira and Ryutaro Abe.)