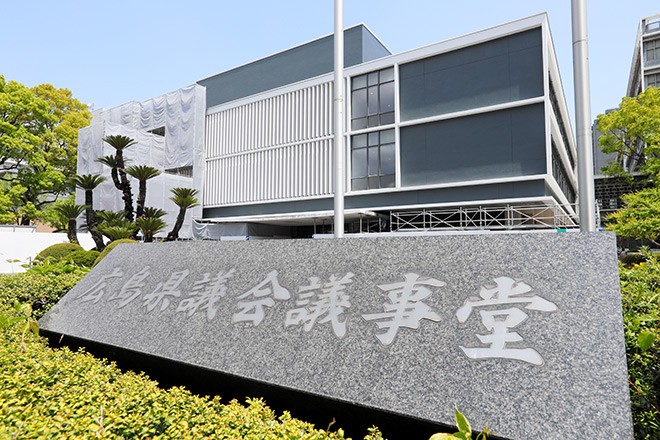 HIROSHIMA--Dozens of local assembly members are now nervously looking over their shoulders for signs of prosecutors and angry supporters.

The June 18 arrests of Katsuyuki and Anri Kawai on suspicion of vote-buying in connection with the July 2019 Upper House election have spread fears among politicians in Hiroshima Prefecture that they could be next.

Prosecutors have accused the couple of distributing about 25.7 million yen ($240,000) to 94 Hiroshima assembly members and others to gather votes for Anri’s election bid.

The Asahi Shimbun has found 31 individuals in Hiroshima Prefecture who have admitted to receiving money from the Kawais. Of them, 24 are either mayors or current or former local Hiroshima assembly members.

Many have already been questioned by prosecutors investigating the case against the Kawais.

One Hiroshima municipal assemblyman recalls visiting Katsuyuki’s local office in May 2019. Katsuyuki congratulated the local politician for winning a seat in the assembly election and gave him an envelope containing 300,000 yen.

He said he repeatedly declined the money, but Katsuyuki ended up shoving the envelope into the assemblyman’s suit pocket.

The assembly member said he never asked for the money and did not feel that Katsuyuki was trying to buy his vote.

“I was forced to take the money,” he said.

Prosecutors started questioning the assembly member in March, invariably bringing back memories of the cash exchange.

“Even if it meant fighting with him (Katsuyuki), I should have rejected the money,” the assemblyman said.

He said he was also surprised to learn that 94 people had received money from the Kawais according to the arrest warrant.

While he believes he may be one of the 94, the assemblyman said he has yet to explain the cash acceptance to his own supporters, but he did tell his wife.

“I am also at fault for accepting the money,” the member said. “I want to continue as a municipal assembly member, but I wonder if I will also face charges.”

Local TV stations carried the arrests of the Kawais as their top news story.

Another Hiroshima municipal assembly member who received several hundreds of thousands of yen said: “I was weak in not being able to return the money so I am also at fault for accepting it. I also played a part in the crime, so it is not only Katsuyuki who did something wrong.”

The member also said supporters do not know about the money because they would be shocked if they found out.

Even those who returned the money to Katsuyuki hold doubts about whether their supporters will believe they did nothing wrong.

One Hiroshima prefectural assemblyman said Katsuyuki phoned and asked for a meeting for the first time in 10 years.

The member declined the invitation because he planned to support the other Liberal Democratic Party candidate in the 2019 Upper House race.

But Katsuyuki came to the assemblyman’s home unannounced and left 300,000 yen with the family. A month later, the member gave the money back to Katsuyuki.

“I returned the money and I also did not campaign on behalf of Anri,” the member said. “But will my supporters believe I did nothing wrong if they found out that I at one time received the money?”

One assembly member reported the money given by Katsuyuki as a donation on a political fund report. The member has also prepared a resignation letter should legal problems arise but said that stepping down is not likely to happen anytime soon.

“If all of the dozens of assembly members involved with the Kawais were to resign at once, Hiroshima would fall into a real mess,” the member said.

(This article was written by Takashi Togo, Kento Matsushima and Taira Goto.)