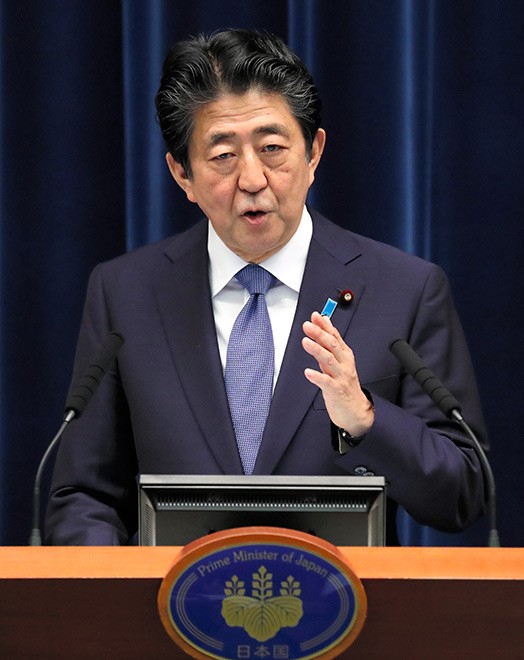 Japan's decision to withdraw from a U.S.-developed land-based ballistic missile system will herald the first rewriting of its National Security Strategy, according to a high-ranking government source.

The new strategy will reflect growing concerns over the novel coronavirus pandemic and include measures for a post-corona world as well as steps to strengthen the nation’s economic security, the source said.

Future discussions will also focus on the ballistic missile threat from North Korea, which was the rationale for installing the now-scrapped land-based Aegis Ashore interceptor missile system, as well as China's growing maritime advances in the region.

The latest moves stem from Defense Minister Taro Kono’s announcement on June 15 that he was halting plans to deploy the Aegis Ashore system due to spiraling costs and time needed to ensure the safety of local communities that were to host it.

Prime Minister Shinzo Abe, in a June 18 news conference, said "concentrated discussions" would be held from this summer to augment Japan’s ballistic missile defense structure in light of the decision to junk the Aegis Ashore system.

The decision to withdraw from the Aegis Ashore system will be made next week by the four relevant Cabinet ministers within the National Security Council (NSC).

Discussions will begin in the NSC from late June regarding steps that need to be taken to bolster the nation’s missile defense system. The discussions will continue until the end of September when government ministries and agencies are required to present their requests for the fiscal 2021 budget.

The government will then ask a panel of experts to hold discussions related to a revising of the National Security Strategy, which was first compiled in December 2013 by the Abe Cabinet.

The strategy is expected to be revised by year-end, along with changes to the National Defense Program Guidelines and the Medium-Term Defense Program, which spells out the defense equipment needed by the Self-Defense Forces.

In addition to ballistic missile defense, some of the key topics to be discussed for a new National Security Strategy related to a post-corona world will likely be strengthening the supply chain for medical care products and equipment as well as measures to handle future pandemics, including restrictions on entry into Japan.

Among the topics related to economic security that will likely be discussed are preventing leaks of advanced technology, securing maritime interests and dealing with cyber-attacks.

A sensitive area of likely discussions will be what to do about attacking enemy military bases.

The government position since 1956 has been that even under the pacifist Constitution, an attack on enemy bases would be considered within Japan’s range of self-defense if it was the only way to prevent the destruction of the nation.

The government interpretation until now has been that the Constitution does not prevent the possessing of the capability to attack enemy bases. However, it was always assumed the U.S. military would jump into the breach if such an emergency arose.

However, some members of the ruling Liberal Democratic Party have called for Japan to possess such capabilities, and future discussions with the U.S. Pentagon may include the possibility of a new division of roles related to this issue

Discussions about the National Security Strategy were needed even before the decision to withdraw from the Aegis Ashore missile defense system, given the rapidly changing security environment surrounding Japan.

Not only has North Korea sharply improved its ballistic missile technology, but China has also been making major maritime advances. New domains of security such as space and cyberspace have also emerged in recent years.

(Yuki Nikaido and Ryo Aibara contributed to this article.)