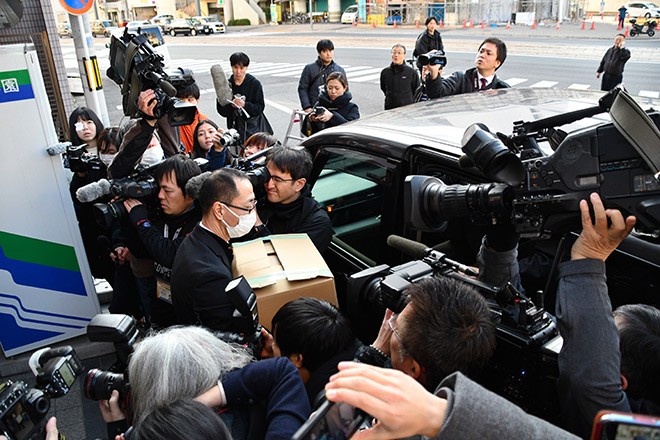 It's not much of a stretch to imagine prosecutors doing high fives for having had the foresight to search the Tokyo offices of a former justice minister and his wife who are embroiled in election campaign irregularities.

Taking such action is exceptionally rare when the Diet is in session, but it turns out that prosecutors had good reason for going ahead with searches in early March of the offices of Katsuyuki Kawai, 57, and his wife, Anri, 46, an Upper House member.

The searches followed the arrests of aides to the Kawais on suspicion of violating the Public Offices Election Law by paying campaign staff amounts that went beyond legal limits.

Last October, a weekly magazine broke the story about the illegal payments to campaign staff, after which prosecutors learned that Katsuyuki Kawai and others might have shredded documents related to the summer 2019 Upper House election when those payments were allegedly made.

The election has now become the focus of alleged criminal behavior by the Kawais, who were arrested June 18 on suspicion of vote-buying.

A key document the investigators were able to re-create was a list of local Hiroshima assembly members and others who received cash payments from the Kawais. The couple were arrested on suspicion of distributing a total of about 25.7 million yen ($240,000) to 94 individuals in Hiroshima Prefecture.

The digital records were found in the course of the investigation by the Hiroshima District Public Prosecutors Office into the illegal payments to campaign staff. The reconstructed list included the names, dates and amounts of the cash payments.

The discovery of the list led to the inclusion of investigators from the Tokyo District Public Prosecutors Office who handle cases involving lawmakers.

Those investigators questioned Hiroshima assembly members in building their case against the Kawais.

In addition to the suspected shredding of documents related to Anri’s Upper House election, the Kawais gathered their aides based in Hiroshima Prefecture to Tokyo for discussions on several occasions about how to handle questions that could arise in relation to Anri’s campaign spending reports, the sources said.

Those developments led prosecutors to search the Tokyo offices of the two Kawais before further attempts could be made to destroy evidence, sources said.

Lawyers who met with the couple said on June 19 that the pair had denied the allegations during questioning by prosecutors.

On the same day, the Tokyo District Court approved the detention of the two Kawais until June 28.