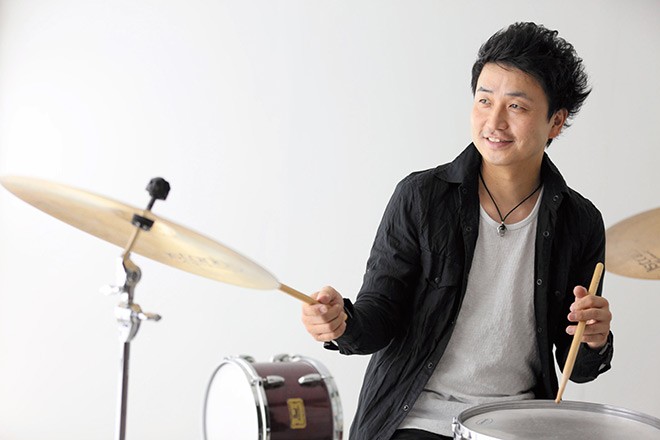 Kay Hirai, a professional drummer, in May (Provided by Kay Hirai)

In 1981, a college freshman was deep into music, practicing the drums that his parents had bought for him at his home in Nara.

Forming a band at the time with his friends, they covered many Beatles' songs.

The college student usually practiced with the storm windows shut so as not to disturb the neighbors. But one day, it became hotter and hotter as he kept beating the drums, so he opened the window to let in fresh air.

When the young man looked down at an empty lot next door from the second-floor room where he practiced, he noticed two junior high school students in school uniforms looking up at him.

“We would like to see you play the drums if you don’t mind,” one of the boys called out.

“All right, come up through the entrance,” he told them.

He was later told that they threw pebbles at the storm windows several times trying to get his attention.

When they came inside, the young drummer performed for a while and asked them if they wanted to give it a try.

One of the boys hesitated. The other, whose name is Kay Hirai, was eager to beat the drums.

Although he said it was his first time playing the drums, he was not bad for a beginner. Kay said he practiced at home, using long chopsticks for cooking in place of drumsticks.

“You are doing well,” the college student commented. And he gave Kay some old drumsticks he no longer used.

Kay kept returning to the young man’s home. When he was out, his mother let the boy into the house to practice.

More than 10 years later, the young man with the drums had graduated from college and joined a supermarket chain, a world away from the music he was infatuated with.

He worked inside a store, serving customers. By then, he had parted ways with the drum set his parents had bought him. He does not remember where his passion went after he lost his fervor for music.

One day, Hirai contacted his parents’ home to invite him to come to his concert. He learned that the young student who practiced on his drums had become a professional drummer.

At the concert, the sound of the jazz drum Hirai played on stage was gentle and delicate. After the concert was over, the man left the venue without meeting him backstage, feeling a little shy about doing so.

In spring last year, the man turned 56, now serving as the deputy chief of the store.

His cellphone rang one night and a male voice asked, “Do you remember me?”

It was Hirai. He was 50. He said he wanted to talk with him because a newspaper reporter, an acquaintance of Hirai, was curious about something from his past.

The reporter had asked about what the college student thought after the two young students threw pebbles at his window.

His recollection of Hirai quickly came back to his mind. What the caller said next took him by surprise.

“I became a professional drummer because you were so kind to let me play the drums,” Hirai told the man.

While they talked, Hirai mentioned electronic drums are available today so that musicians can practice while keeping down the volume of the sound.

When the man said he wished he could have had them back then, Hirai was quick to say he was glad he did not.

“I was deeply moved by your performance because it was a real sound and a vibration,” he said. “Otherwise, I would not have thrown pebbles at the window.”

That thought made the man proud of himself, just a little bit.