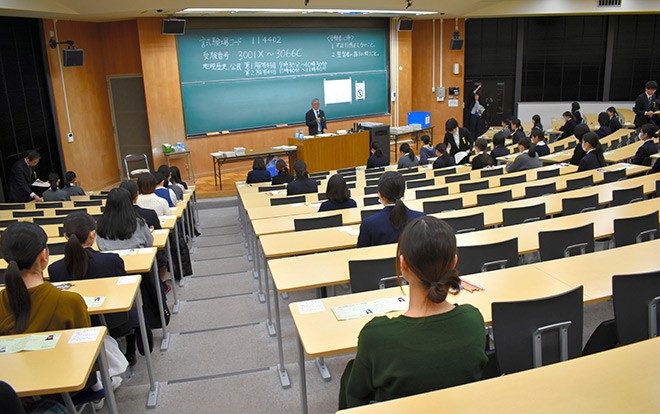 Japanese university entrance examinations for the next academic year, which starts in April, will mostly be held as originally scheduled, although concerns continue about the novel coronavirus disrupting high school classes.

The decision was reached through talks between the education ministry and high school and university organizations.

The standardized university admission exam will be held in mid-January, as scheduled. But two weeks after the initial test, an alternative exam will be held for third-year students who have been affected by school closures due to the outbreak.

The alternative test date is normally set one week after the initial test. Current third-year high school students will be allowed to opt for the alternative date at the time of application.

A national organization of mainly public high school principals had demanded a one-month interval. Two weeks are insufficient for students whose efforts toward university admission have been hampered by canceled classes and other effects of the COVID-19 outbreak.

But a one-month gap between the two exams would have placed too much of a burden on universities, which face challenges in scheduling and securing test venues.

Since a further delay in the decision would have put an unacceptable strain on students planning to take entrance exams next year, the two-week interval should probably be accepted as an inevitable compromise.

With the entrance exam schedule now set, the education ministry has asked universities to adjust the range of exam questions in response to the effects of the outbreak on the candidates’ study situations.

For example, the ministry suggested a reduction in the number of required subjects in the standardized test. It also floated the idea of individual universities allowing students to choose which questions to answer in their exams for some subjects that they usually learn in their third year.

Universities should give serious consideration to these ideas. They should not carry out their entrance exams as if this were an ordinary year.

For their own individual exams, universities are required to offer additional exams and alternative test dates for students who cannot take the initial exams because of virus infections.

As in the standardized exam, these additional opportunities should also be available for high school students whose exam preparation work has been affected by the pandemic. This measure can be taken at each university’s discretion.

Students and their parents are also concerned about the risk of infection during the entrance exams.

Universities need to decide on what safety precautions to take regarding such factors as ventilation and distances between test takers.

To reassure students and their families, universities should seek advice from experts and publish their comments on the anti-infection measures taken. Special care and consideration should be given to ensure the safety and peace of mind of test takers.

It is also important to ensure that applicants who are worried about their health conditions understand that alternative opportunities are available for them.

If Japan is hit by a second wave of infections, the entire exam schedule will inevitably be changed.

The government and universities should be prepared for this possibility by planning such steps as increasing the number of students admitted based on recommendations.

Universities could also offer an alternative school year, such as one starting in September, in response to the current situation.

A considerable number of Japanese universities have autumn admissions in addition to spring enrollment for Japanese students who have returned home after studying abroad as well as for general applicants.

An increase in the number of such universities offering two options for admission would give students greater flexibility in their academic planning and lead to wider diversity in university education.

Unlike the debated proposal of a uniform switch to start the academic year in September, a system that allows students to choose between spring and autumn admission would not place a heavy burden on society.

Entrance examinations are also opportunities for students to choose their universities. Universities should think about what they can do to attract young people.

This unprecedented situation for students requires universities to demonstrate their commitment to supporting entrance exam applicants by using their wisdom and intellectual capabilities.