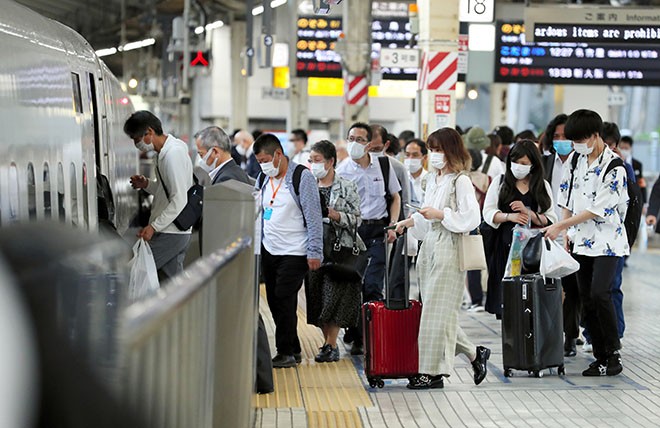 Passengers decked out in face masks board a Shinkansen bullet train at JR Tokyo Station on June 19. (Naoko Kawamura)

During the Edo Period (1603-1867), a number of "sekisho" barrier stations were installed at key traffic points around Edo, today's Tokyo, to stop travelers for inspection. Officials closely monitored flows of people on main roads in the Kanto, Tokai and Koshinetsu regions.

A phrase was created to describe the tight control on the movement of people and goods imposed through sekisho: "Irideppo ni deonna" (entering guns and exiting women).

Inflows of guns into areas around Edo were restricted to prevent rebellions against the Tokugawa Shogunate. Women leaving Edo were rigorously inspected to prevent the wives of daimyo feudal lords, who were required by the shogunate to live in the capital as sort of hostages, from fleeing. Flows of people and goods on main roads were strictly controlled to keep the shogunate system intact.

Instead of irideppo ni deonna, "iricorona ni decorona" (entering and exiting corona) was the focus of the restrictions imposed on travel across prefectural borders to prevent the novel coronavirus from spreading.

The voluntary restrictions on travel across prefectures were lifted on June 19. Prefectural borders, which usually draw little attention, suddenly made their presence felt as if they were national borders. But that situation has ended, at least for now.

On June 20, there were many news stories about people taking Shinkansen bullet trains and intercity express buses from Tokyo to travel to other parts of the nation. Some people talked about "going on a trip for the first time in a while."

But many people probably are not yet ready to make long trips. The restored freedom of movement creates both joy and anxiety.

The antonym of the phrase "fuyo fukyu" (nonessential, non-urgent) may be "hitsuyo shikyu" (essential, urgent). But there are endless gradations between the two concepts.

How about journeys to meet parents, children or grandchildren living afar, for instance? Where are such outings located on the spectrum? How about visiting friends in hospital or women returning to their parents' homes to give birth? Many people must have felt uncertain about the appropriateness of traveling for such purposes.

While the invisible sekisho set up by the government's requests for voluntary travel restrictions has been removed, I sense that many people still harbor some subtle psychological barriers about traveling.

My feeling is that I should focus my attention on the thoughts and feelings of people I may visit, instead of what the central and local governments say about traveling.