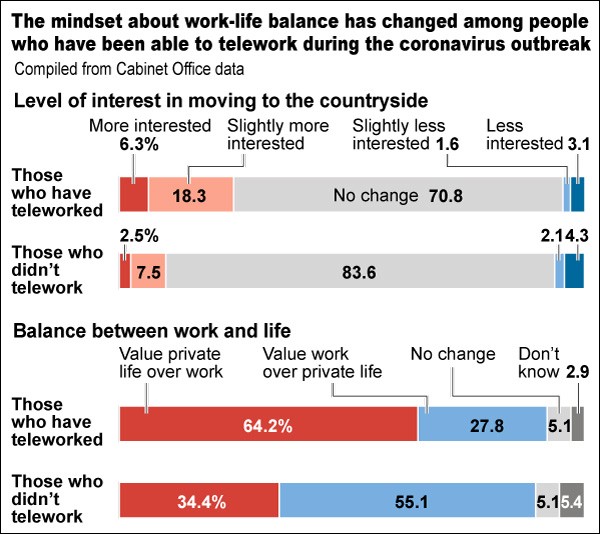 The COVID-19 pandemic seems to have succeeded where years of strategies and incentives by the central and local governments failed in convincing young people to dump Tokyo and other large cities for life in the countryside.

Many young people working in Tokyo and other major Japanese cities during the COVID-19 pandemic are abandoning the once sacrosanct idea that employees must put work above all and shifting their priority to life outside the office, a Cabinet Office survey shows.

“Those who have been teleworking have shown a big change in their mind-sets,” said Yasutoshi Nishimura, the state minister in charge of economic revitalization, at a news conference, commenting on the survey. “We see this as an opportunity to solve the issue of population concentration in Tokyo and hope to introduce measures to promote that.”

The shift in attitudes appears in part to be driven by the recent embrace of teleworking by companies to allow employees to work from home during the health crisis.

Among 6,685 people nationwide who are currently employed, 34.6 percent said that they had teleworked during the pandemic. The percentage of those who teleworked was even higher among those who work in Tokyo’s 23 wards, at 55.5 percent.

About 25 percent of those who teleworked said they had become more or slightly more interested in living in the countryside since the crisis began.

That figure was 15 percent higher than that of people who did not telework or those who were unable to adjust their commuting time, highlighting the significant difference between teleworkers and non-teleworkers.

Among 5,554 people who live in or around the major cities of Tokyo, Osaka and Nagoya, interest in living in the countryside was high mainly among young people, regardless of whether they were teleworking, the survey found.

A total of 35.4 percent of people in their 20s who work in Tokyo’s 23 wards said they were interested in jettisoning big city life. The corresponding figure was 15.2 percent among those who live in Osaka and Nagoya and their neighboring areas.

Asked if during the pandemic their ideas about maintaining a work-life balance had changed, 64.2 percent of those who teleworked said that they now want to value their personal life over their jobs, while 34.4 percent of those who didn’t telework or didn’t get to go to the office using flex time said the same.