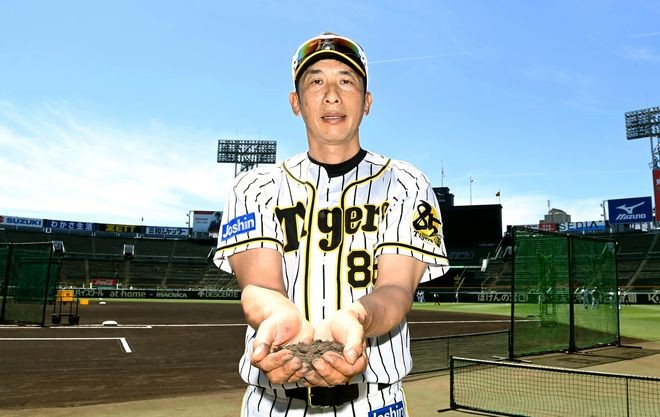 Akihiro Yano, the manager of the Hanshin Tigers, shows a handful of dirt from Koshien Stadium on June 7. (Pool photo via Nikkan Sports)

Japanese high school baseball players, heartbroken because their annual tournament was canceled due to the pandemic, are getting a consolation prize: a spoonful of dirt.

It’s not just any soil--it’s from Koshien Stadium. Which means it holds special meaning to all who love the game in this baseball-mad country.

And every year, after a team loses, the players, many weeping uncontrollably, scrape the dirt near the dugout to take home as a memento.

On a recent afternoon, it was the members of the professional club, the Hanshin Tigers, who were digging with their hands to collect dirt from Koshien, their home stadium.

The dirt will be put in transparent balls hanging from key chains and sent to some 50,000 high school baseball players. Each ball has the words: “2020 102nd Koshien,” for the 102nd tournament, and pictures of a ball, bats and the stadium. They are to be delivered in August, when the tournament had been scheduled to start.

Hibiki Kawamato, a centerfielder and slugger at Iwamichisuikan High School in Shimane Prefecture, western Japan, was thrilled. The Tigers are his favorite team, and he plans to put the key chain proudly on his bag.

The game means so much to him. “When I get a hit when the team really needs it, I get praised by everyone,” he said. “I’m going to play baseball till I die.”

Akihiko Tanimoto, a social studies teacher who works with the team, said the players were still working out hard, and the cancellation served as a lesson to not quit in the face of hardships.

“Koshien was our goal, but it is not the purpose of why we play high school baseball, which is about not giving up until it’s over,” he said in a telephone interview.

The school has made it to the Koshien summer tournament 10 times.

How the custom of bringing home Koshien dirt originated is unclear. But it’s a tradition that dates back decades.

The winning team also gathers the dirt, but only after the final award ceremony, which is witnessed by fans from all over Japan. They fill Koshien’s stands and cheer raucously, in much the same way American fans follow the NCAA basketball tournament.

The dirt is replenished regularly, to make sure there is enough.

The idea of the key chain originated from Tigers players, who understood the disappointment of having the Koshien dream shattered. Many played in the tournament as youngsters.

“We all pondered what we could do for them, and I think it holds special meaning that we did this for them together as a team,” said outfielder Kosuke Fukudome, who took part in the Koshien tournament while at PL Gakuen high school.

“I want them all to stay optimistic,” said Fukudome, formerly of the Chicago Cubs, Cleveland Indians and the Chicago White Sox.