Fire burning at hazmat facility at U.S. air base on Okinawa 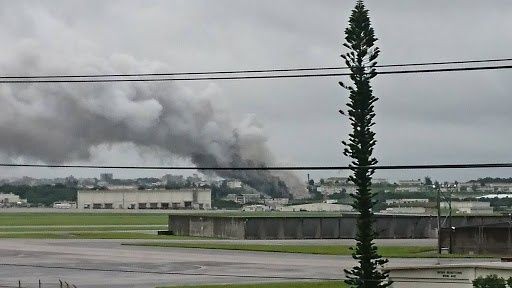 Smoke is seen rising from a building at the center of Kadena Air Base on June 22. (Provided by a reader/ The Asahi Shimbun)

A fire was burning Monday in a storage building for hazardous materials at a major U.S. air base on Japan’s southern island of Okinawa, the U.S. military said.

The blaze began Monday morning at the building in the central part of Kadena Air Base and was still burning a few hours later, but it was contained within the base’s perimeter, according to a U.S. Air Force statement.

Footage on Japanese television showed thick gray plumes of smoke billowing from the building, called the 18th wing Hazardous Materials Pharmacy. The area was closed off and personnel in the area have been evacuated as firefighters get the fire under control, the statement said. It said no injuries have been reported.

The cause of the fire is unknown, the statement said. Kadena is the largest U.S. air base in the Far East.

More than half of about 50,000 U.S. troops in Japan are stationed on Okinawa under a bilateral security pact. Many residents on Okinawa have long complained about environmental hazard, noise and crime related to the base.

Environmental impact of what happens at U.S. bases has been a major concern on Okinawa. In April, more than 140 tons of fire-fighting foams believed to contain cancer-causing substances leaked out of the Marine Air Station Futenma at the center of a relocation dispute. The Defense Ministry last month said its water sampling results showed no major problems.