VOX POPULI: Remembering the Battle of Okinawa: perils of uniformity 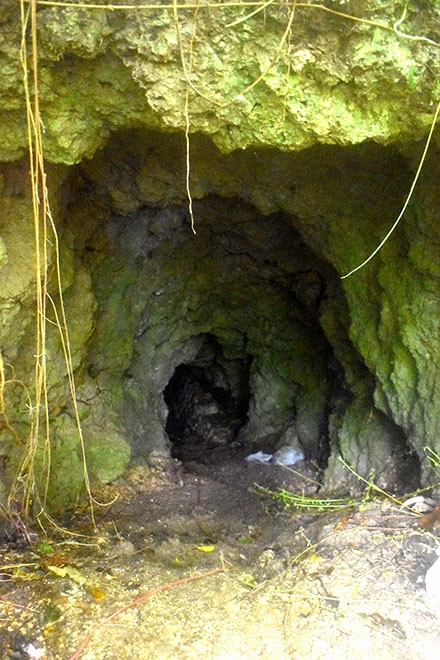 The entrance of a dugout in Itoman, Okinawa Prefecture, where Japanese soldiers and civilians holed up during the Battle of Okinawa in 1945 (Asahi Shimbun file photo)

I cannot even begin to imagine the anguish that innocent civilians of Okinawa felt as they faced their deaths in the Battle of Okinawa which was fought on their land 75 years ago.

And nothing pains me more than the fact that many died by group suicide.

They were practically brainwashed by the Japanese government and the Imperial Japanese Army into believing they would be massacred or raped by U.S. troops, if captured.

About 140 citizens took refuge in the Chibichiri-gama cave in the village of Yomitan, when a U.S. soldier called to them in Japanese from the cave's entrance, "Korosanai! Detekoi!" (We won't kill you. Come out.)

But 60 percent of the citizens ignored the call and killed themselves, some by setting the cave on fire.

On the other hand, little is known of the fact that many lives were saved in another cave in the same village.

According to "Ikinokoru" (Surviving) by nonfiction writer Tetsuro Shimojima, there were about 1,000 evacuees in the Shimuku-gama cave. There, too, a U.S. soldier stood at the entrance and called on the citizens to surrender.

Some insisted on committing group suicide. But the actions of one old man led to an entirely different outcome.

With empty hands, the man walked out of the cave, talked with the American, came back inside and persuaded everyone to surrender.

A former immigrant to Hawaii, the man spoke English. And he had a reputation for standing up to Japanese soldiers from time to time, for which he was reviled as "hikokumin" (unpatriotic person), according to Shimojima.

Wartime Japan was a society that practically forced all citizens to keep marching to their deaths. Killing the "kichiku" (evil and inhuman) enemy and sacrificing one's life in the process was considered the ultimate civic duty.

It was probably this disrespect for human life that prevented the powers that be from deciding to end the war, even after Japan's defeat became a foregone conclusion.

The Battle of Okinawa represented a scaled-down version of that mentality.

Aside from what happened at the Shimuku-gama cave, it appears there were other similar cases of former immigrants to the United States talking their Japanese peers into surrendering.

Now that our society is starting to overrate uniformity, I remind myself of the need to be able to look at ourselves with the eyes of an outsider.