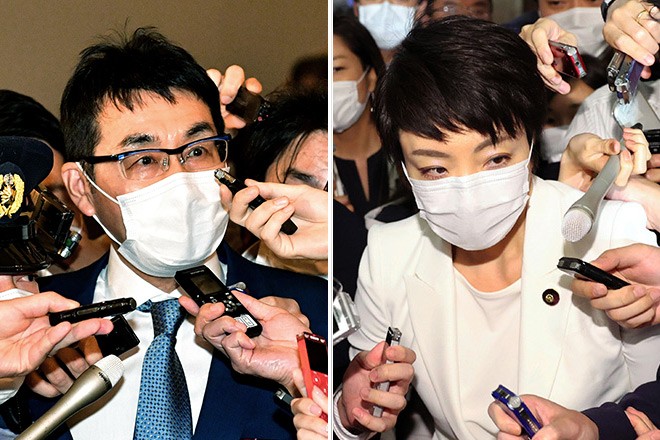 Former Justice Minister Katsuyuki Kawai confirmed that he gave cash to local assembly members in Hiroshima Prefecture but said the payments were not intended to round up votes for his wife, sources said.

Kazuyuki, 57, and Anri, 46, an Upper House member, were arrested last week on suspicion of vote-buying.

They are accused of distributing a total of 25.7 million yen ($240,000) to 94 individuals in Hiroshima Prefecture in the months up to the July 2019 Upper House election in which Anri won her first term.

About 40 of the individuals are local assembly members.

According to sources close to the investigation, Katsuyuki told officials with the Tokyo District Public Prosecutors Office that while he did give some cash to assembly members, the purpose was not to gain votes for his wife.

The sources did not say if Katsuyuki stated why he gave the money to the assembly members.

Katsuyuki also denied allegations that he had conspired with his wife in violating election laws.

Investigators suspect that Anri gave five individuals in Hiroshima a total of 1.7 million yen in a conspiracy with her husband to buy votes.

The Kawais are close to Prime Minister Shinzo Abe and Chief Cabinet Secretary Yoshihide Suga. The investigation into the scandal that originated in Hiroshima Prefecture has now extended to the capital.

The Tokyo headquarters of the LDP provided 150 million yen to Anri for her Upper House election campaign. The amount was about 10 times that given to Kensei Mizote, the incumbent LDP Upper House member who also ran in the 2019 election.

Mizote lost out to Anri and a candidate backed by the opposition parties.

According to LDP sources, 120 million yen of the total given to Anri’s campaign came in the form of a political party subsidy funded by taxpayers’ money. That amount was distributed to the party branch offices headed by Katsuyuki and Anri between April and June 2019.

The remaining 30 million yen consisted of funds collected by the LDP through membership fees.

Before his arrest on June 18, Katsuyuki told close associates that the cash payments he made to the local assembly members did not come from the 150 million yen received from LDP headquarters.

Katsuyuki explained that there were strict rules on how the money could be used because political party subsidies made up most of the amount.

Receipts for all expenditures covered by the subsidy must be kept for reports about how the subsidy was spent. There are no legal limitations on the size of subsidies given to an individual party candidate, but any expenditure of 50,000 yen or more must be reported and have a receipt attached.

Katsuyuki said the cash payments to local assembly members came from money he had at hand.

Moreover, some of the assembly members who received the payments said they did not give Katsuyuki a receipt for the money.

LDP Secretary-General Toshihiro Nikai has said the 150 million yen was distributed to pay for publications intended to bolster party support in line with the establishment of a new party branch in Hiroshima Prefecture headed by Anri as she prepared for the summer Upper House election.

Nikai said a number of publications were released, adding that the money could not have been used for cash payments to local assembly members.