45 sickened in toxic blaze at U.S. military base in Okinawa 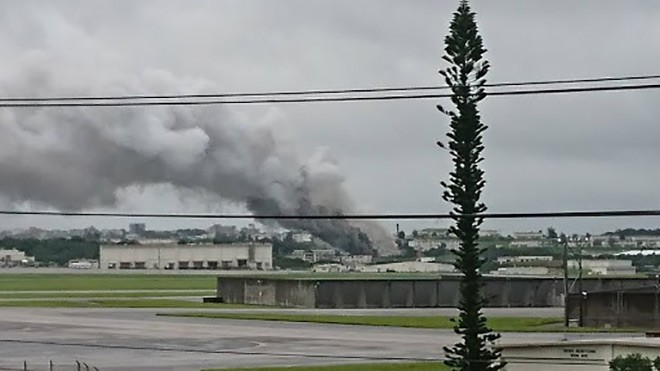 Smoke billows from the U.S Forces’ Kadena Air Base in Okinawa Prefecture on June 22. (Provided by an Asahi Shimbun reader)

NAHA--A blaze at a storage facility for hazardous materials at a U.S. military base in Okinawa Prefecture on June 22 left dozens of people needing treatment for smoke inhalation and exposure to chlorine gas.

Authorities at the U.S. Forces’ Kadena Air Base said the fire flared at 8:50 a.m. in a building south of the facility's runways, and was extinguished around 2 p.m.

The officials said 45 people who inhaled smoke and gas were treated and returned to duty. Others around the base managed to evacuate.

The cause of the blaze is being investigated. Officials said emergency responders installed around the facility ensured there was no safety risk to the community.

Residents living close to the base were urged by the U.S. Forces’ Facebook page to consult a doctor if they experience eye and throat irritation.

Local firefighters were not called upon to help extinguish the fire.

U.S. authorities provided no details to the Japanese government on the hazardous materials stored on-site.

Kadena town government officials expressed frustration over not being able to take appropriate measures due to the absence of information on the hazardous materials.

“The U.S. Forces have not responded to the prefectural government’s inquiries regarding the impact of the fire on residents living near the air base,” Okinawa Governor Denny Tamaki said. “This is a very regrettable situation that is causing much anxiety among residents.”

Tomoya Nakasone, 55, head of a local association headquartered near the base, said he was attending a meeting and did not realize that an emergency had occurred.

He said he neither heard a siren nor an announcement from town officials. “I have not been informed of anything. I’m very worried,” Nakasone said.

A 70-year-old resident of Kadena, when asked if she was aware of the incident, replied: “I didn’t know that. I should have been informed. Whatever and whenever something happens inside the air base always remains a mystery.”

(This article was written by Shohei Okada, Takako Fuchizawa and Mayuri Ito.）