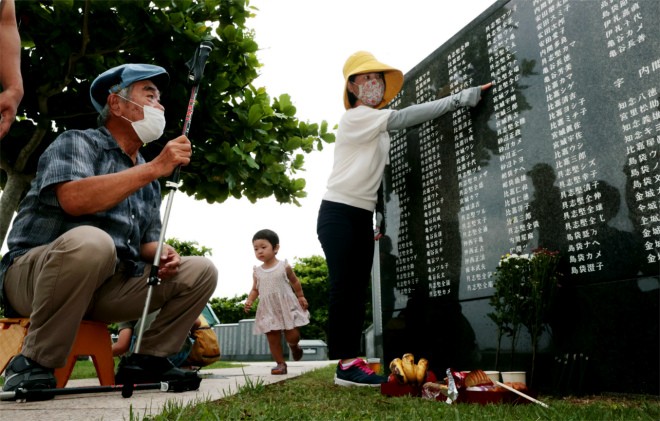 Relatives of the deceased arrive at the Cornerstone of Peace memorial in Itoman, Okinawa Prefecture, on June 23 to search for the names of family members killed in the 1945 Battle of Okinawa. (Minako Yoshimoto)

ITOMAN, Okinawa Prefecture--A scaled-down memorial service was held here June 23 to remember victims of the 1945 Battle of Okinawa, which claimed one in four lives of the civilian population.

This year, fewer dignitaries attended the annual Memorial Service for All the Fallen in the Battle of Okinawa at the prefecture’s Peace Memorial Park due to concerns about the spread of the novel coronavirus in large gatherings.

Third-year high school student Akane Takara recited a poem she had composed for the occasion.

Okinawa Memorial Day marked the 75th anniversary of the battle that claimed an estimated 200,000 lives on both sides.

“We must not forget the hideous war memory,” Okinawa Governor Denny Tamaki said in his peace declaration.

The ground battle raged for about three months from the end of March in 1945 as the Pacific War was winding down and Japan was staring at defeat from U.S. forces.

The vast majority of Okinawa's residents were forced by the Imperial Japanese Army to take part in the fighting, either by taking up arms or providing much-needed nursing for the wounded.

More than 120,000 Okinawans, including soldiers and civilian employees in the military, lost their lives in the conflict.

Prime Minister Shinzo Abe was not invited to attend the event, nor were the Upper House president and Lower House speaker, due to concerns about the spread of COVID-19.

The mayors of A-bomb-hit cities Hiroshima and Nagasaki were also supposed to be invited to attend for the first time, but actually were not for the same reason.

Only 200 or so Okinawan people attended the event compared with 5,100 last year.

The names of war victims, including soldiers and civilians, regardless of their nationalities, are inscribed into the Cornerstone of Peace memorial.

This year, 30 new names were added, including a U.S. individual. This marked the first time in 12 years for the name of a U.S. national to be added.

In his peace declaration, Tamaki noted that while 75 years have passed, 70 percent of all U.S. military facilities in Japan are concentrated in Okinawa Prefecture.

He added that incidents and accidents involving U.S. military personnel “have continued to exert a great influence on the lives of the Okinawan people.”

Tamaki also mentioned a contentious land reclamation project for a new U.S. military base in the Henoko district of Nago city that is being promoted by the central government and opposed by a majority of local residents.

Referring to Henoko's rich natural environment, he said, “It is important for our generation that is alive now to think about the issue with an eye on responsibility for the future.”

In a video message, Abe reiterated his oft-said line about hoping to reduce the burden on Okinawa posed by U.S. bases.

“I hope to achieve this result one by one,” he said, without mentioning the furor over construction in Henoko as a replacement facility for the U.S. Marine Corps Air Station Futenma.