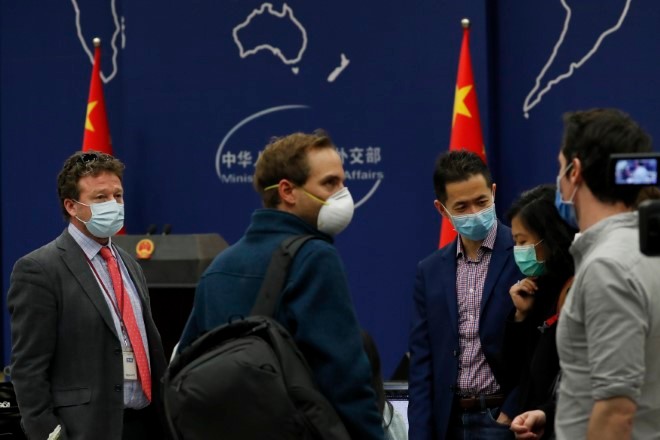 BEIJING--China warned Tuesday it will take countermeasures after the United States added four more Chinese media outlets to a list of organizations that should be considered “foreign missions” in the United States because of their ties to the government and ruling Communist Party.

Foreign ministry spokesperson Zhao Lijian attacked the Trump administration’s move as “yet another example of the U.S.’s flagrant political suppression of the Chinese media,” saying it would interfere with their reporting on the United States and betray America’s commitment to freedom of the press.

“We strongly urge the United States to abandon the Cold War mentality and ideological prejudice, and immediately stop and correct this wrong practice that serves no one’s interest. Otherwise China will have to make the necessary legitimate response,” Zhao said.

The U.S. decision Monday to add the four organizations to the list, which already included five others, doesn’t directly impede their ability to conduct journalism but could force some to cut staff in the United States and is likely to further aggravate relations between the two countries.

State Department officials said the four organizations, including state-run CCTV, will be required to submit the identities of all staff in the United States and any real estate holdings just as they would if they were foreign embassies or consulates.

The five other Chinese organizations were directed to cap the number of people they can employ in the United States in March--a month after they were designated as foreign missions.

China responded by revoking the media credentials of all American journalists at The New York Times, The Wall Street Journal and The Washington Post.

State Department officials said the organizations are essentially mouthpieces for the Communist Party and Chinese government, not legitimate news outlets.

The United States designated Soviet outlets as foreign missions during the Cold War. That precedent reflects the bitter state of relations between the United States and China, which are at odds over the origin and response to the coronavirus, trade, human rights and other issues.