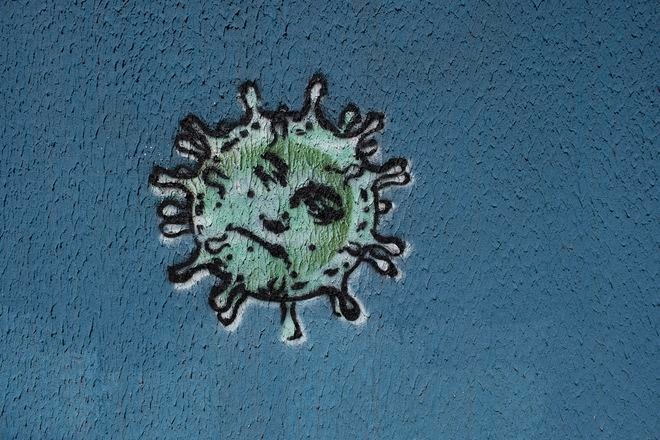 A wall sports an image of the novel coronavirus that has the face of Brazil's President Jair Bolsonaro painted on it, in Rio de Janeiro, Brazil, on June 22. (AP Photo)

British economist John Maynard Keynes (1883-1946) famously stated, "In the long run we are all dead."

Taken literally, this is a truism, plain and simple. But Keynes meant this as a criticism of economists with whom he disagreed.

They maintained that since the economy will stabilize in the long run, no matter how bad it is at present, it makes sense to let nature take its course.

Keynes, on the other hand, believed in taking every possible step to address any immediate problem.

Now, what about this statement that "death is everyone's destiny"?

Uttered by Brazilian President Jair Bolsonaro in reference to the growing number of deaths from COVID-19 in his country, the words themselves are similar to those of Keynes.

But what Bolsonaro implied was completely different. This statement was nothing more than an excuse for his total failure to stop the infections.

Bolsonaro, who has refused to wear a mask, was ordered by a federal court on June 23 to put one on when he is in public.

Coronavirus infections in Brazil have risen 3.5-fold in the last month. The total now tops 1 million.

Aside from the presidential lack of policy for controlling the spread of the virus, the dire state of affairs also owes to the nation's grave socioeconomic inequality. There is an outstandingly large number of people whose survival will be immediately threatened if they don't go out to work.

As well, the crisis is further aggravated by the nation's fragile public health care system and other factors that are keeping society dysfunctional on many levels.

The pandemic is still raging in many countries, especially in newly emergent or developing parts of the world. The spread of infections is actually accelerating, not slowing down.

Unlike in Japan where it feels as if the curve has been flattened, the COVID-19 crisis is still very much a glaring reality in the rest of the world.