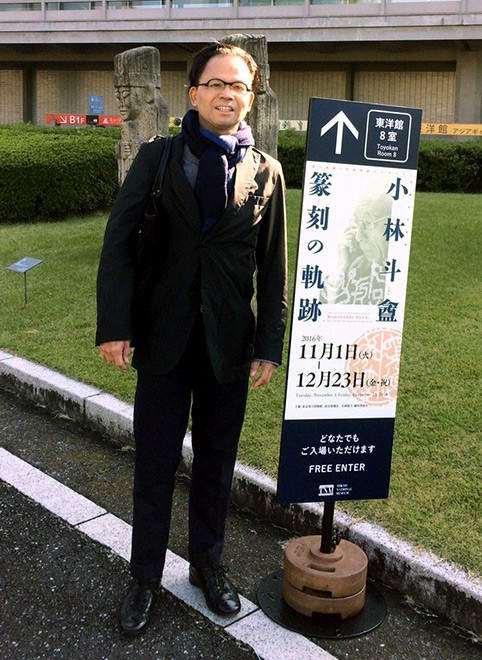 Toshio Akagi, an official at the Kinki Local Finance Bureau, stands in front of the Tokyo National Museum in 2016. (Provided by Akagi's widow)

One week after the close of the regular Diet session, a slew of important policy issues, including but not limited to problems related with the new coronavirus pandemic, are still waiting to be addressed.

It is particularly difficult to overlook the obstinate refusal of Prime Minister Shinzo Abe to launch a fresh investigation into the dubious sale of state-owned land to Moritomo Gakuen, an Osaka-based school operator linked to Abe’s wife, Akie.

Unless the Abe administration responds sincerely to a desperate call for a new inquiry to uncover the truth from the widow of a former Finance Ministry official who committed suicide after becoming embroiled in the scandal, it cannot hope to regain public trust or ensure that there will be no recurrence.

Two days before the Diet session ended, Masako Akagi, the widow, submitted the petition for a fair and neutral third-party probe into the scandal with 352,659 signatures collected online from late March. She presented the petition through lawyers representing her to Abe, Finance Minister Taro Aso, the Lower House speaker and the Upper House president.

Her husband, Toshio Akagi, an official with the Kinki Local Finance Bureau who killed himself in March 2018, left behind notes that outlined how he and others at the bureau came under strong pressure to rewrite documents related to the sale of land in Osaka Prefecture to Moritomo Gakuen.

In March, she filed a damages suit against the government and Nobuhisa Sagawa, who was director-general of the ministry’s Financial Bureau that oversaw the sale of state assets and is suspected to have given the order to falsify the document. However, Abe and Aso refused to reopen an investigation.

Masako then launched an online signature-collecting campaign, saying she did not want her husband’s death to be “wasted.” Her message has clearly struck a sympathetic chord with many people.

Still, Abe and Aso appear to have no intention of changing their stance toward the issue. How can they deny the need of a fresh inquiry into the scandal?

“My ministry severely disciplined the ministry officials involved based on a thorough investigation into the matter,” Aso said at a news conference on June 16.

But the investigation he was referring to was conducted by fellow officials of the ministry and failed to reveal the specifics about the role Sagawa played in the scandal through his instructions.

None of the key questions has been answered, such as why the land was sold at a steep discount of 80 percent to the school operator and whether the questionable land deal was influenced by the fact that the first lady served as honorary principal of Moritomo Gakuen.

Answering questions about the matter at the Diet, Abe said, “We already know the results of the investigation (into the matter) conducted by prosecutors, who are known as the most powerful and independent investigation agents.”

But this is a misleading argument. A criminal investigation into the case should not be put in the same category with an inquiry for regaining public trust and preventing a recurrence.

The widow also said, “The two (Abe and Aso) are on the side of facing questions and not in a position to refuse to conduct a new investigation.”

The government should take this comment seriously and agree to allow a fresh, independent probe into what occurred.

A new related move has emerged within the Diet. In response to an opposition request, the Lower House Financial Affairs Committee has ordered the head of the house’s Research Bureau to clarify the facts concerning the falsifications of official documents related to the land sale.

The order was issued under a “preliminary research” program, which was created in 1997 to enhance the Diet’s ability to check the government. Research done under the program is intended to provide relevant information for committee deliberations.

Under a rule to give minority groups access to the program, such “preliminary research” is initiated when a request is made by 40 or more members of the Diet.

In conducting preliminary research, the Research Bureau can ask for cooperation from the government by, for example, requesting the submission of a certain document, but such requests are not legally enforceable.

If it has no intention to set up an independent panel to conduct a fresh inquiry into the affair, the government should at least provide full cooperation for the research.

The Diet, for its part, should make all-out efforts to get to the bottom of the scandal to fulfill its duty as the watchdog of the executive branch.