‘This is from Abe.’ Politicians received bulk of Kawai’s cash 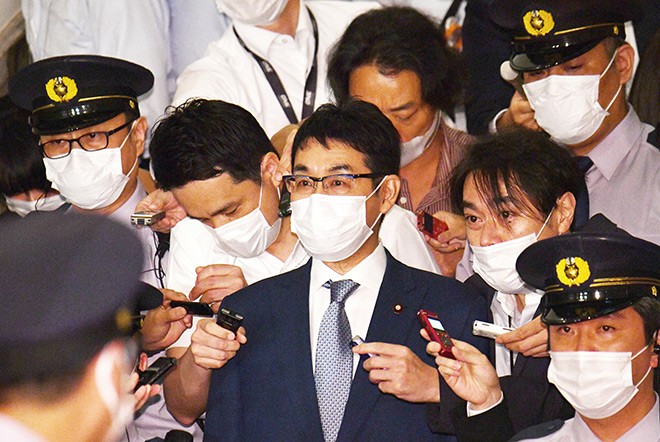 About 70 percent of the cash distributed by a former justice minister allegedly to help his wife win election went to local politicians in Hiroshima Prefecture, including one who announced he was resigning, sources said.

The Tokyo District Public Prosecutors Office has confirmed the identities of those who received the payments from Katsuyuki Kawai, 57, a Lower House member representing a district in Hiroshima Prefecture, and his wife, Anri, 46, who won her first Diet seat in the July 2019 Upper House election, the sources said.

When the Kawais were arrested on July 18 on suspicion of vote-buying, prosecutors alleged that 94 individuals in Hiroshima Prefecture had received a total of about 25.7 million yen ($240,000) from the couple.

According to the sources, 18.1 million yen, or about 70 percent of the total, went to 42 current and former local politicians, ranging from mayors to prefectural and municipal assembly members.

All 42 have ties to the ruling Liberal Democratic Party.

One local politician on the list of recipients said at a June 25 news conference that he was resigning.

Yoshinori Tenma, 73, submitted a document the same day saying he would step down as mayor of Mihara effective June 30. At the news conference, he admitted to receiving 1.5 million yen from Katsuyuki.

In addition to local office-holders, Katsuyuki handed out about 3.9 million yen to 46 individuals with ties to his support organization and 3.7 million yen or so to six staff members of Anri’s campaign, the sources said.

Prosecutors suspect the cash distributed by the Kawais came from an unusually large amount provided by the LDP’s headquarters in Tokyo. The couple are close to Prime Minister Shinzo Abe and Chief Cabinet Secretary Yoshihide Suga.

Katsuyuki has denied this, saying the payments to local assembly members came from money he had at hand.

Hideko Shigemasa, 78, a member of the Fuchu municipal assembly, admitted to reporters on June 25 that she had received 300,000 yen from Katsuyuki when she visited Anri’s office in Hiroshima city in May 2019.

Shigemasa explained that she could not refuse the cash when Katsuyuki told her, “This is from Abe.”

She said she still has the money.

The Kawais have also denied allegations of vote-buying during questioning by prosecutors.

However, investigative sources said that on a number of occasions, Katsuyuki told the recipients that he wanted their help since his wife would be running in the Upper House election.

On June 24, Nobuya Okuhara, 77, a Hiroshima prefectural assembly member who once served as president of the chamber, told reporters that he received a total of 2 million yen from the Kawais over a number of occasions.

The amount is considered the largest given to any of the 94 individuals.

According to the investigative sources, the Kawais summoned support organization members and campaign staff to their local Hiroshima offices to hand out the money.

But for local office-holders, the Kawais themselves went to the recipients’ offices or residences to hand over the money, the sources said.

Anri is suspected of giving five office-holders a total of 1.7 million yen, while the rest was distributed by Katsuyuki.