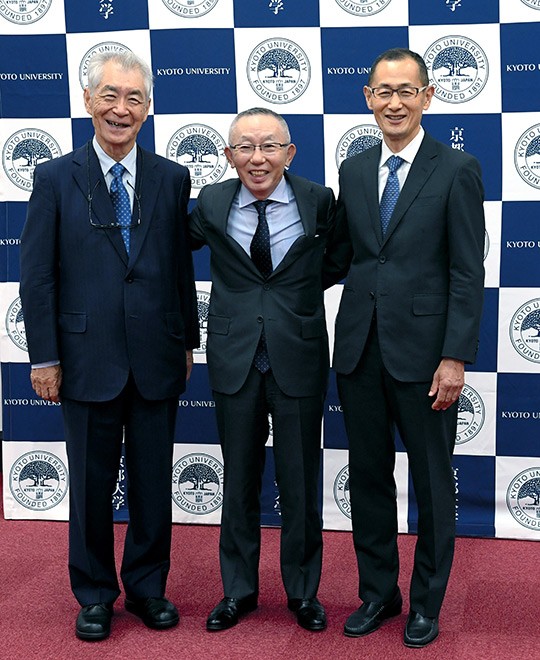 Yanai, chairman and CEO of Fast Retailing Co., which operates the Uniqlo clothing brand, will fund projects by researchers Tasuku Honjo and Shinya Yamanaka. The projects will focus on studying cancer and creating low-cost iPS cells.

“I believe that the biggest medical challenges are cancer and viruses,” Yanai said at a June 24 news conference held at the university. “I’ll be glad if I can help Kyoto University scientists conduct research in those areas.”

Yanai will donate 500 million yen annually for the next decade to the university’s new fund for cancer immunotherapy research. That research is led by Honjo, and that part of the donation will total 5 billion yen. The donations will begin this fiscal year, which started in April.

The other 5 billion yen will go to two of Yamanaka’s research projects, although the bulk of the funding will skew to one of them.

One is a study of the novel coronavirus using patients’ iPS cells, a type of stem cell believed to have promising applications in the field of regenerative medicine. That will get 500 million yen.

The other is a project called “my iPS cell.” That aims to create autologous iPS cells, which could be transplanted from one part of a person’s body to another at a cost of around 1 million yen. Donations for that project will come in each year for nine years, starting in fiscal 2021, totaling 4.5 billion yen.

Both Yanai and Honjo graduated from Ube High School in Yamaguchi Prefecture.

“The fund will enable us to build research facilities and support young researchers with new and adventurous ideas,” said Honjo, a distinguished professor at the university who won the Nobel Prize in Physiology or Medicine in 2018.

Yamanaka, a Nobel Prize-winning stem cell biologist and director of Kyoto University's Center for iPS Cell Research and Application, revealed a plan to put Yanai’s name on a production facility for the my iPS cell project.

In Japan, even big-name researchers such as Honjo and Yamanaka cannot maintain proper research environments without soliciting donations.

There are two major factors behind this. National universities, including Kyoto University, are receiving fewer government subsidies after they became independent administrative entities.

The other reason is that “competitive research funds,” which require recipients to produce short-term results, account for a larger portion of the total research funding.