EDITORIAL: Japan should heed the final advice of COVID-19 panel 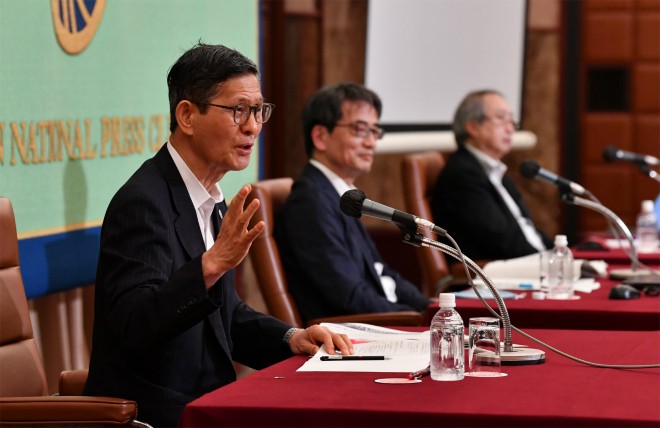 Members of the government's expert panel on the novel coronavirus hold a news conference at the Japan National Press Club in Tokyo on June 24. (Takuya Isayama)

The government abruptly decided to disband a panel of medical experts on Japan’s response to the new coronavirus pandemic and set up a new advisory council. This seemingly erratic action will increase people’s doubts on whether the administration has a coherent and consistent strategy for dealing with the COVID-19 crisis.

Yasutoshi Nishimura, the minister in charge of tackling the formidable public health challenge, announced the decision on June 24.

We have no objection to the reorganization. But before taking the step, the government needed to scrutinize and assess the panel’s work over the past few months to clarify issues and challenges in the health crisis so that key lessons will be learned and shared.

This is a crucial part of organizing and operating the envisioned new advisory council. But the government is not taking this vital step and, surprisingly, did not even inform the panel of its decision before the announcement.

This loose and high-handed approach has raised serious concerns about the government’s ability to deal with a possible second wave of infections while mitigating damage to social and economic activities.

The expert panel has made some important proposals in the government’s response to the crisis, such as avoiding dangerous “sanmitsu,” or “the three C’s,” of a confined environment where many people gather closely together and come into close contact with each other. The group has also called for reducing face-to-face personal contact by 80 percent and adopting new lifestyles.

Alarmed by a surge in confirmed cases in Japan, these experts frequently faced the media and answered questions carefully and meticulously. Some panel members provided information to the public through social media. They deserve applause for the way they tackled the challenge and the many appropriate proposals they have made.

But there is no denying that the panel’s operations created the impression that it was making the policy decisions concerning the government’s handling of the pandemic.

Around the time Nishimura was making the surprise announcement on June 24, the chairman and other panel members were holding a separate news conference unaware of what was happening.

Indicating their awareness of problems with the panel’s high-profile role, the members stressed that the government was responsible for policy decisions and suggested that the role and mandate of the experts should be made clearer.

This is a good point. They also made some appropriate new recommendations, including the establishment of a system to allow the government to quickly grasp regional situations concerning the outbreak and train more epidemiologists.

Although the panel was criticized for getting too much of the spotlight, the blame should be placed mainly on the government.

When Prime Minister Shinzo Abe at the end of February called for voluntary restrictions on large events and nationwide school closures without consulting with the experts in advance, he was roundly criticized.

Abe then switched to acting as if he was leaving all policy decisions related to the outbreak entirely to the expert panel.

After the state of emergency was declared in April, both Abe and Nishimura started repeating the phrase “based on the opinions of the experts” whenever they answered questions about the government’s COVID-19 strategy at the Diet or news conferences.

They failed to make serious efforts to win broad public support by explaining the government’s actions in their own words.

In planning and implementing measures to fight the virus, the government aims to seek the counsel of experts in a wide range of fields, including medicine, economy and law.

The experts will be required to offer sincere opinions and proposals based on objective and neutral standpoints.

The government should respect what the experts have to say, but it should make its policy decisions on its own and take responsibility for the results. The government and the new advisory panel must define their relationship clearly in line with this principle and commit themselves to their respective roles and responsibilities.

Detailed records of the related discussions should be kept so that citizens can later trace the decision-making process.

The expert panel’s recommendations at the June 24 news conference, which will likely be its last, should be steadily put into practice in the coming weeks.