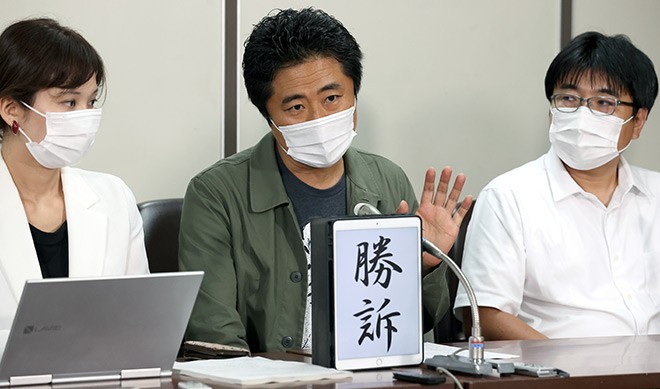 Kazuhiro Soda, center, a documentary filmmaker living in the United States, and other plaintiffs hold a news conference on June 25 following a Tokyo High Court ruling in their favor. (Shiro Nishihata)

The Tokyo High Court put the state on notice to get its act together before the next Lower House election so overseas voters are given the opportunity to review the performances of Supreme Court justices.

The high court on June 25 sided with a May 2019 ruling by the Tokyo District Court which said the central government had acted unconstitutionally by depriving voters overseas of this right.

It went further by stating it would be illegal if the next Lower House election was held without representation by overseas voters on the fitness of Supreme Court justices to serve.

The court said not allowing overseas voters the chance to review the performance of Supreme Court justices violated Article 15 of the Constitution, which guarantees the people the inalienable right to “choose their public officials and to dismiss them.”

Overseas voters had long pressed to be able to cast ballots in national elections, and laws were gradually amended to allow for voting in all the constituencies of Lower and Upper house elections.

But the central government never took steps for them to gauge the fitness of serving Supreme Court justices in Lower House elections.

Such review performances are outlined under Article 79 of the Constitution, which states that newly appointed justices must be reviewed at the same time as the first Lower House election held after their appointment and again during the Lower House election after 10 years have passed.

Voters dissatisfied with a Supreme Court justice mark an X next to the justice’s name. Any justice receiving a majority of X ballots faces dismissal. So far, no justice has been removed from office.

The latest appeal was brought by five plaintiffs, one of whom is Kazuhiro Soda, a documentary filmmaker who has resided in the United States since 1993.

The plaintiffs also sought compensation, but the high court rejected the claim. The Tokyo District Court had ordered the central government to pay 5,000 yen ($47) in token compensation.

Instead, the Tokyo High Court ruled that a better outcome aimed at protecting the constitutional rights of the plaintiffs would be for the central government to prepare overseas ballots in a manner that allowed them to review Supreme Court justices.

The high court noted that three of the five plaintiffs still reside abroad. If they are not allowed to review the justices’ performance in the next Lower House election, the central government will have acted illegally, it said.

Despite the rejection of the compensation request, the plaintiffs claimed an overwhelming moral victory.

Motoki Taniguchi, a lawyer who had no say on the performance of Supreme Court justices while living in the United States, said at a June 25 news conference: “Rather than the issue of compensation, the court acknowledged it would be illegal if the review of Supreme Court justices was conducted under the current system. I was so happy when I heard the ruling that my body began shaking.”

Kyoko Yoshida, who headed the team of lawyers, called the ruling a “virtual win” and said it was “very important because it would force the central government to change the voting system.”

The government had argued it did not have sufficient time to print the ballots with the names of the Supreme Court justices under review and send them to overseas embassies and consulates where Japanese abroad can vote.

But the high court pointed to revisions made in 2016 to the law on review of Supreme Court justices that allowed for printing of ballots much earlier than before.

Also noting that online voting and writing in the names of justices the voter wanted dismissed is possible, the high court said by 2017 it was unconstitutional to not allow overseas voters the chance to review the justices.

At the June 25 news conference, Soda said the Japanese public should become more aware of the performance of Supreme Court justices because their rulings have a huge impact on society.

(This article was compiled from reports by Eri Niiya and Shunsuke Abe.)