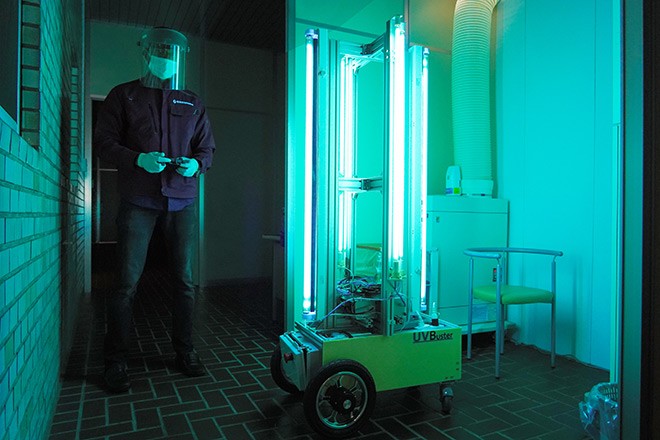 Robots built by a Tokyo-based company designed to kill the flu virus using deep ultraviolet rays eliminated novel coronavirus on walls and floors in an experiment at a Tokyo university hospital.

Farmroid Co., which developed the robots, plans to market them from early July.

The robots, called UV Buster, irradiate surfaces with deep ultraviolet rays said to render 99.9 percent of the flu virus inactive when it is exposed to the rays for 2.46 seconds within a 10-centimeter distance.

Unlike normal ultraviolet rays, deep ones have shorter wavelengths, which makes their radiation more damaging.

The hospital, located in the capital's Itabashi Ward, where Farmroid is also based, confirmed the robot eliminated the coronavirus after using it to irradiate the virus on surfaces.

Yasuhiro Gon, a professor of pulmonary medicine at Nihon University School of Medicine, said the facility was keen to use the robots as a measure against infection from the novel coronavirus even though the nation's state of emergency has already been lifted.

Gon, 54, said the school wanted to "thoroughly prevent the spread of the virus and prepare for a second wave.”

Farmroid intends to sell the robots, which are built to order, to medical institutions, airports and commercial facilities.

As deep ultraviolet rays can have harmful effects on the human body, the robots can only be used only in places where people are not present. The company has no plans yet to sell them to the public.

Farmroid representative Kazuki Iimura said the robots would be priced to compete with expected rivals.

“We want to provide our products at a cheaper price than foreign companies that make similar products,” Iimura, 45, said.