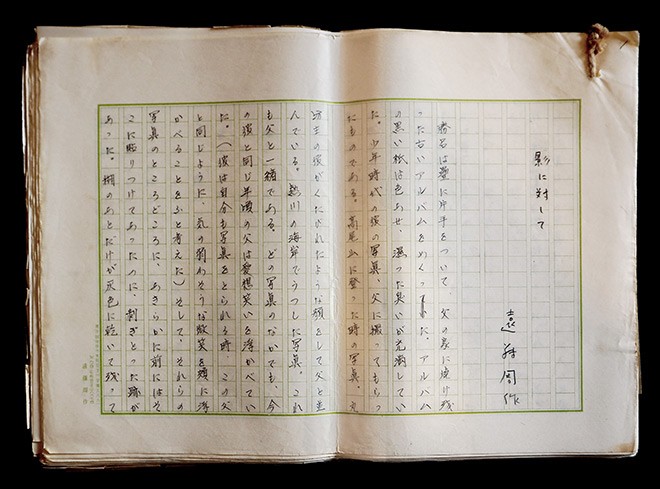 A clean copy of the manuscript of the unpublished novel “Kage ni Taishite.” The copy bears additions and changes made by Shusaku Endo and other comments by a third party. (Provided by Endo Shusaku Library Museum)

NAGASAKI--An unpublished novel by acclaimed author Shusaku Endo, whose “Silence” has been adapted into a major Hollywood film, has been discovered at the museum dedicated to his works here.

This is the first time that a fair copy of a finished novel by Endo has turned up, although his unpublished diaries, letters and drafts for essays had been discovered after the Christian writer’s death in 1996. He was 73.

City officials announced the discovery of “Kage ni Taishite,” tentatively translated as “To a shadow,” which comprises 104 pages, as well as Endo’s two-page draft, on June 26. Nagasaki is home to the Endo Shusaku Library Museum.

The museum will display the manuscripts from July 1, as Endo’s relatives have granted permission. The novel will be carried in the summer edition of the Mita Bungaku literary journal, to be put out on July 10.

“Kage ni Taishite” is a medium-length story centering on a man who supports his family by translating foreign detective stories into Japanese after giving up his dream of becoming a novelist.

He sets out on a journey to visit the acquaintances of his late mother, whom he was separated from when he was very young, to trace her life.

In the novel, the man is portrayed as agonizing over his mundane life, despite identifying with the life of his mother, who devoted herself to playing the violin.

The novel is thought to have been penned sometime after March 1963, judging from his address scribbled on the discovered manuscript papers.

“I believe that Endo wrote the work several years after ‘Silence,’” said Muneya Kato, a 74-year-old author who studied under Endo, referring to his representative work published in 1966.

The storyline of the protagonist calling on people associated with his mother resembles the plot of Endo’s short novel released in 1968 under the title, “Muikakan no Ryoko,” (A six-day trip).

Endo’s own experiences are mirrored in the newly discovered novel, including his bitter regrets that his mother had to die alone and her divorce from his father.

The novel also gives descriptions of Dalian in the former Manchuria and Kobe as settings, both of where Endo lived when he was young.

“For Endo, stories related to his own mother is the most important theme,” Kato said. “This work may be the beginning of his literary pursuit.”

Yuriko Kawasaki, a researcher at the museum, discovered and examined the manuscripts after she found them among about 30,000 pieces donated by his family in February.

The clean copy bore no publisher's seal, suggesting that it was never published.

It is not known why the work was not printed.

Endo's "Silence" is considered his greatest work. Set in 17th-century Japan, the plot revolves around Portuguese Jesuit priests traveling to villages in what is now Nagasaki to help persecuted Japanese Christians.

It was made into a film by Academy Award-winning director Martin Scorsese and released in the United States in 2016.