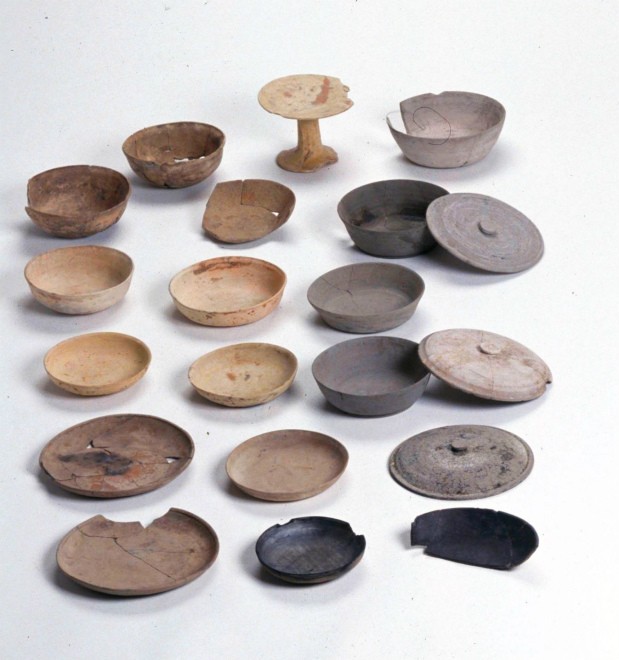 NARA--Much like today, a mysterious disease in the eighth century forced Japanese to adopt new lifestyle practices, including using smaller dishes, according to the Nara National Research Institute for Cultural Properties.

The ancient capital of Heijokyo was apparently hit by a smallpox outbreak in the Nara Period (710-784). Residents thought the disease was brought by “oni” demons and tried to fight the sickness with wooden tablets featuring magic words and symbols.

Megumi Jinno, 46, head of the institute’s Archaeology Section 2, wrote in an entry on its official blog that people back then may have discarded dishes and other items touched by infected people.

Jinno noted that many nearly intact plates were excavated from a pit along Nijo Oji street near the Heijo Palace ruins in the city. The pit is believed to have been a garbage dumping site during the Nara Period.

The plates were most likely discarded from the nearby residence of Fujiwara no Maro (695-737), the youngest of four brothers who established the four family lines of the Fujiwara clan, according to Jinno.

The excavated plates came in many varieties, ranging from simple dishes to ones apparently used by high-ranking officials. Wooden talismans and everyday items were also found in the pit.

Pottery products used as plates at the time easily absorbed moisture and had rough surfaces that made it difficult to wash off stains and dirt. Repeated use would make them unhygienic.

Unglazed dishes had also been used for large meetings and events attended by monks and farmers since the Kamakura Period (1185-1333). But it became common to simply dispose of these dishes, like modern-day paper cups and plates.

“Plates used by an unspecified number of people should not be used over and over again,” Jinno said. “They might have come up with this infection prevention measure after they experienced the smallpox outbreak.”

Changes were also seen in the size of dishware. Large plates had been popular before the smallpox plague, but afterward they were increasingly replaced by smaller ones, Jinno said.

In response to recommendations by an advisory panel on preventing COVID-19 infections, the health ministry has specified practical examples of new lifestyle norms, including serving food on smaller plates.

“It is possible that our countermeasures against unknown infectious diseases have always been similar,” Jinno said. “There may be some things in history that we can understand only after we experienced the coronavirus pandemic.”