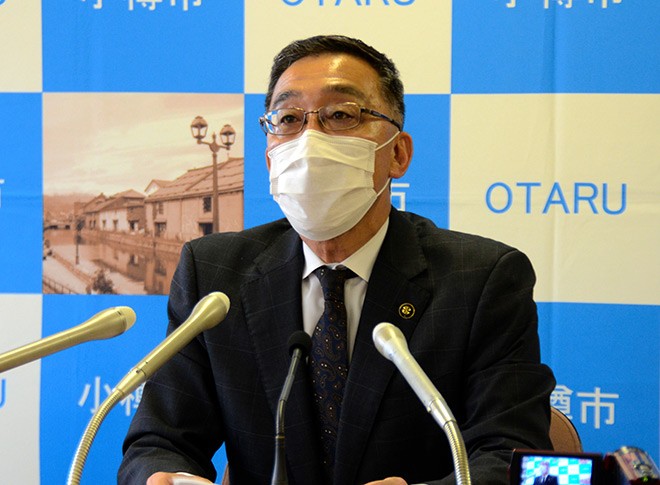 Otaru Mayor Toshiya Hazama announces that 14 new novel coronavirus infections have been confirmed in his city at a news conference in Otaru, Hokkaido, on June 28. Hazama said, “I have a strong sense of crisis.” (Yasuo Sakuma)

OTARU, Hokkaido--Otaru city officials want the music silenced after announcing on June 28 that 14 new cases of novel coronavirus have been confirmed here along with cluster outbreaks at three of the city's karaoke pubs.

The officials requested that the pubs halt their business operations on a voluntary basis during noontime hours here.

A snack bar in the city’s Hanazono district, where customers can do karaoke during lunchtime, was confirmed to be the site of a cluster infection on June 24.

City officials on June 28 confirmed that an infected customer of the bar had visited other similar pubs in the district, triggering cluster outbreaks in two other establishments, including one named Karen. A total of 33 customers of the three bars and their close contacts tested positive.

Newly infected patients were 10 women in their 60s to 80s and one man. The ages and sexes of three other patients were not disclosed. Eight patients had mild symptoms and six showed no symptoms.

The city government released the name of the Karen pub, where the infections were found on June 26, to the public after the bar owner, who was infected with COVID-19, exhibited serious symptoms. His condition made it difficult for authorities to conduct contact tracing of his customers.

The city government is asking people who visited the Karen bar on or after June 1 to call the health center.

As a further precaution, 22 public facilities in Otaru, including the city’s library, will be closed until July 12.

In Hokkaido, 17 new infected patients were added to the tally that day, bringing the total number in the prefecture to 1,239 cases.