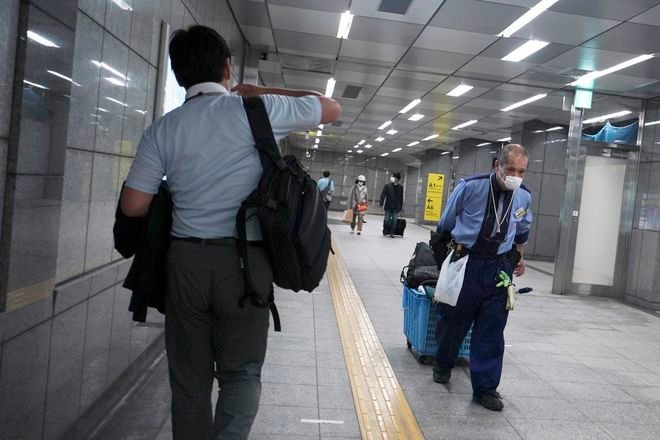 A transit employee wearing a protective mask to help curb the spread of the novel coronavirus walks along a subway corridor in Tokyo on June 26. (AP Photo)

Jobs in Japan are getting harder to find due to the effects of the novel coronavirus outbreak.

The monthly total number of job openings, including those posted in the previous month but still open, in May dropped by 8.6 percent from April, according to data compiled by the labor ministry. It was the largest month-to-month decline since figures were first compiled in 1963.

The data also showed the country’s monthly ratio of job openings per job seeker in May fell for the fifth consecutive month, the second-largest drop on record.

The ministry said on June 30 there were 1.20 job openings per job seeker in May, down 0.12 point from the previous month. The month-to-month decline in the seasonally adjusted ratio was the second largest after the 0.20 point recorded in January 1974 following the first oil crisis.

The country’s jobless rate in May also rose to 2.9 percent, up 0.3 point from a month earlier, the internal affairs ministry announced the same day. The number of unemployed people increased by 190,000 from the previous month to 1.97 million.

Those figures show the coronavirus outbreak has dealt a serious blow to Japan’s employment situation.

This was apparently due to more people resuming job searches after the state of emergency over the pandemic was lifted for the entire country in late May.

By region of new job openings posted at local public employment offices, the ratio of job openings per job seeker in May fell below 1 in seven prefectures including Hokkaido, Aomori, Kanagawa, Shiga, Kochi and Nagasaki.

The figure for Okinawa dipped below 1 for the second straight month.