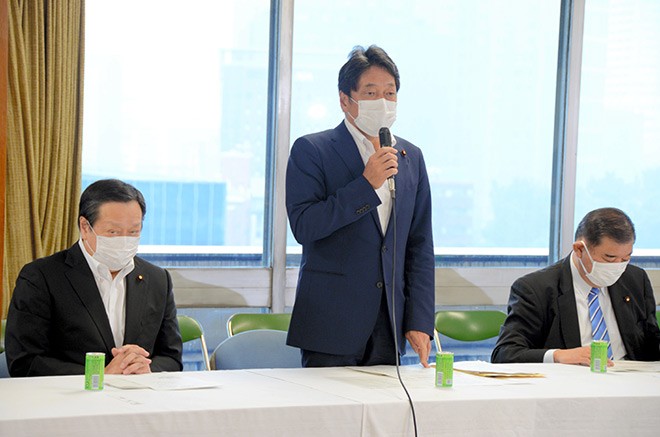 Itsunori Onodera, a former defense minister, speaks at the June 30, 2020, session of a working group within the ruling Liberal Democratic Party discussing how to bolster the nation's missile defense system. (Daizo Teramoto)

A ruling Liberal Democratic Party working group on June 30 started discussions on improving the nation’s defense against ballistic missiles, including whether Japan should have the capability to attack enemy bases.

The talks began after Japan recently decided to scrap the deployment of the U.S.-made, land-based Aegis Ashore missile defense system.

The group, headed by Itsunori Onodera, a former defense minister, hopes to compile its recommendations by the end of July.

At the first session, participants discussed possibly increasing the number of Aegis destroyers in the Self-Defense Forces capable of intercepting ballistic missiles. Another idea mentioned was creating an offshore “megafloat” that could fire interceptor missiles.

When the talks turned to possessing the capability of attacking enemy bases, including ballistic missile launch sites, a wide range of views were heard.

After the committee meeting, Gen Nakatani, another former defense minister, indicated the need for that capability. He pointed out that even the government had long interpreted the pacifist Constitution to mean that such a capability was acceptable if it was the only way to prevent the destruction of the nation.

However, Takeshi Iwaya, another former defense minister, said it would be a major leap in logic to talk about possessing the capability to attack enemy bases just because it had become difficult to deploy the Aegis Ashore system.

Iwaya said possessing such a capability would represent “a major shift in government policy about an exclusively defensive posture” for the SDF.

“There will be a need for very careful discussions,” Iwaya said.

After the meeting, Onodera said talks about attacking enemy bases should be held within certain limits, saying the Constitution only recognizes possessing the absolute minimum level of such a capability.

“We would not be able to possess a capability that could mean the total destruction of an enemy nation,” Onodera said.