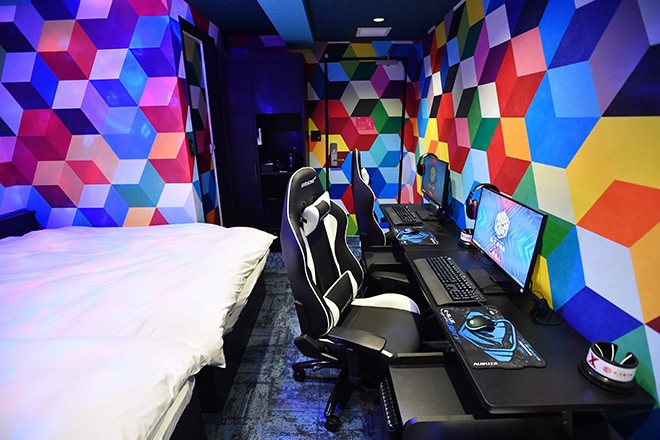 The district is known as a hot spot for otaku geeks.

The new hotel, called “esports hotel e-ZONe,” is set up so players can quickly get into their game and then stay the night.

Following the Osaka prefectural government’s guidelines designed to prevent the spread of the new coronavirus, the hotel will open its doors from July 3, but only allow in a limited number of guests. The pandemic delayed its opening by three months, originally set for April.

From the outside, it almost looks like an arcade. Inside, rows of computers and monitors are lined up under the glow of bright red and blue lights.

The first three floors make up a common space for hotel guests, where computers are equipped for advanced games.

Guests can enjoy playing online games as much as they want from check-in to check-out.

The fourth through eighth floors make up an accommodation space where male and female guests are separated.

Some floors host capsule rooms, while others have private rooms, where gaming facilities are set up.

“Right after you enter our hotel, you can enjoy a sense of immersion as if you were in the game’s world,” a hotel official said.

He expects professional esports teams and school clubs will also use the hotel for training.