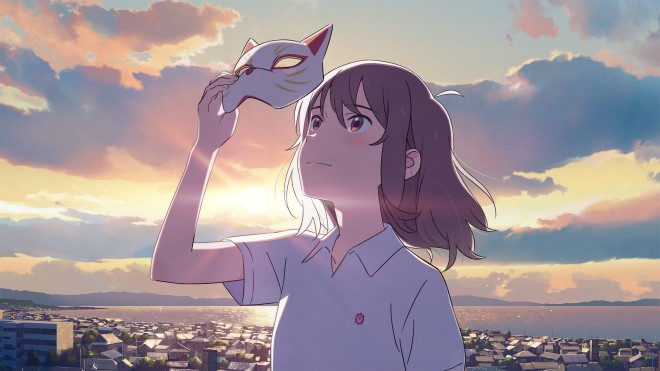 A scene from "A Whisker Away" (Provided by Netflix)

An overachieving boy and a girl who masks her feelings and transforms into a cat are at the center of “A Whisker Away,” which became available on Netflix on June 18.

The feline fantasy film is a tender coming-of-age story that captures the growing pains of junior high school students struggling with their identities.

The anime was originally set to be released theatrically in June, but its release was postponed due to the coronavirus pandemic. The feature film landed on its feet and is now streaming worldwide on Netflix.

It is based on a screenplay by Mari Okada, whose past works include "The Anthem of the Heart" and "Her Blue Sky." It was co-directed by Junichi Sato, a veteran director known for "Pretty Guardian Sailor Moon," "Magical Doremi" and other works, and Tomotaka Shibayama, for whom this is the first feature film.

"We created the imagery and sounds on the premise that it would be shown in theaters,” Sato said. “But I guess streaming isn't a bad idea because the theme is so personal."

Shibayama added the film also has a universal theme and message that fit with the times.

"I think it especially resonates with audiences now, since the coronavirus pandemic has made us think about how we keep a distance from others and how we connect with them," he said.

The story is set in Tokoname, Aichi Prefecture, known for its pottery. Miyo (voiced by Mirai Shida), also known as "Muge" (short for "mugendai nazo-ningen," or "infinitely enigmatic person"), has a crush on Hinode (Natsuki Hanae).

She starts to make advances on him with the help of a magical mask that transforms her into a cat.

Although Hinode is a high achiever, he is in anguish because he secretly harbors a desire to dedicate himself to pottery.

Muge meanwhile uses different "masks" at home and at school, as she copes with the divorce and remarriage of her parents.

"Muge is a twisted heroine who can't imagine being loved by someone and is the most honest when she is 'in disguise,'" Sato said.

That is why Hinode becomes annoyed with Muge, as she catapults herself at him.

"She protects herself by giving herself an excuse, thinking that it is her annoying actions which are bad, and that he doesn't hate her from the bottom of his heart."

The latter half of the story sees Muge and Hinode taking on an adventure on the bustling "Cat Island" floating in the sky, after she decides to use up one of her nine lives, giving up on her human life and changing permanently into a cat.

Shibayama drew sketches to expand his creative ideas based on the screenplay.

"I feel like I did my very best as I closely watched and learned from Sato, who is a legendary animator," he said.