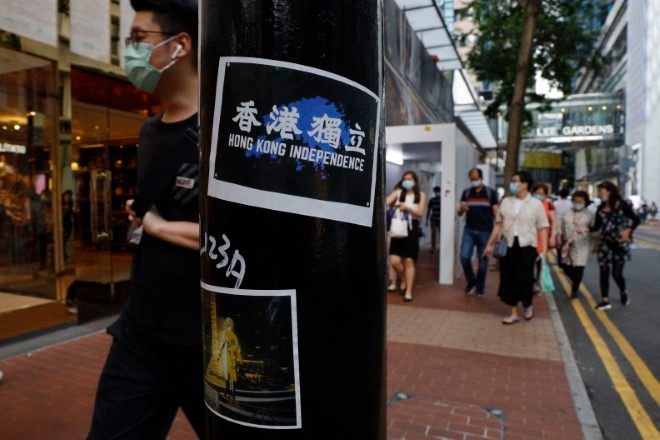 Stickers with messages of the pro-democracy movement are left by protesters on a street in Hong Kong on July 2. (AP Photo)

HONG KONG--China’s government and pro-Beijing activists in Hong Kong condemned what they called foreign meddling in the territory’s affairs on Thursday, as countries moved to offer Hong Kongers refuge and impose sanctions on China over a new security law.

Chinese foreign ministry spokesman Zhao Lijian said no amount of pressure from external forces could “shake China’s determination and will to safeguard national sovereignty and Hong Kong’s prosperity and stability.”

He urged the United States to abide by international law and stop interfering in Hong Kong’s affairs, and not sign a sanction bill into law.

His comments came after the U.S. House of Representatives on Wednesday joined the Senate in approving a bill to rebuke China over its crackdown in Hong Kong by imposing sanctions on groups that undermine the city’s autonomy or restrict freedoms promised to its residents.

If the bill becomes law, “China will definitely take strong countermeasures, and all consequences will be borne by the U.S. side,” Zhao said at a daily briefing.

Vice President Mike Pence in a television interview Thursday called the law a betrayal of the international agreement China signed.

“We want to reset the trading relationship, but we want China to recognize international agreements, to recognize the human dignity of all of their people, and that includes all the people of Hong Kong,” he said.

Meanwhile, dozens of pro-Beijing activists and lawmakers protested outside the U.S. Consulate in Hong Kong to demand that the U.S. stop meddling. The group said it gathered 1.6 million signatures online in support of its call.

Tam Yiu-Chung, Hong Kong’s sole delegate to the National People’s Congress Standing Committee, said on public broadcaster RTHK on Thursday that the new security law imposed by Beijing on Hong Kong was not harsh. If it were, no one would dare violate the law, he said.

His comments came a day after thousands of protesters marched against the security law, which took effect in Hong Kong late Tuesday.

The security law outlaws secessionist, subversive and terrorist acts, as well as any collusion with foreign forces in intervening in the city’s affairs. Critics say the law effectively ends the “one country, two systems” framework under which the city was promised a high degree of autonomy when it reverted from British to Chinese rule in 1997.

The maximum punishment for serious offenses under the legislation is life imprisonment, and suspects in certain cases may be sent to stand trial on the mainland if Beijing deems that it has jurisdiction.

The law takes aim at actions that occurred during anti-government protests last year. It says destruction of government facilities and utilities would be considered subversive, while damaging public transportation facilities and arson would constitute acts of terrorism.

About 370 people were arrested during and after Wednesday’s protests, including 10 on suspicion of violating the new security law. Some of those arrested allegedly possessed materials that advocated Hong Kong’s independence.

Hong Kong police arrested a man on a London-bound flight early Thursday on suspicion of having stabbed a police officer in the arm during Wednesday’s protests.

The 24-year-old man, surnamed Wong, was arrested on a Cathay Pacific flight after police received an anonymous tip-off about his travel plans, police said.

Wong had purchased a ticket on Wednesday and boarded the flight with no check-in luggage, police said. He did not respond to the crew when they called him by name, and was not in his designated seat. Police identified him after conducting a sweep of the plane.

Meanwhile, two protesters were sentenced to four weeks in jail on Thursday for vandalizing a ticketing machine at a rail station in September last year. They were among nearly 9,000 arrests by police in connection with the anti-government protests between last June and May this year.

The central government’s passage of the security law for Hong Kong has triggered concern from the territory’s former colonial ruler, Britain, and other countries.

British Prime Minister Boris Johnson said Wednesday that imposition of the law was a “clear and serious breach” of the Sino-British Joint Declaration, the treaty that guaranteed the former British colony would enjoy a high degree of autonomy and civil liberties for at least 50 years after its handover to Chinese rule.

The Foreign Office summoned Chinese Ambassador Liu Xiaoming on Wednesday to a meeting with Permanent Secretary Simon McDonald, who reiterated Britain’s concern. Britain also announced that it is extending residency rights for up to 3 million Hong Kongers eligible for British National Overseas passports, stressing that it would uphold its historic duty to its former colony. Those eligible will be able to live and work in the U.K. for five years before applying for settled status and then again for citizenship.

On Thursday, the Chinese Embassy in London said such a move would be in breach of “international law and basic norms governing international relations.”

“We firmly oppose this and reserve the right to take corresponding measures,” it said in a statement, without elaborating. “We urge the British side to view objectively and fairly the national security legislation for Hong Kong, respect China’s position and concerns, refrain from interfering in Hong Kong affairs in any way.”

Australian Prime Minister Scott Morrison said Thursday his government is considering a move to provide a “safe haven” to Hong Kongers, and Taiwan opened an office to help Hong Kongers move to Taiwan for employment and other purposes.