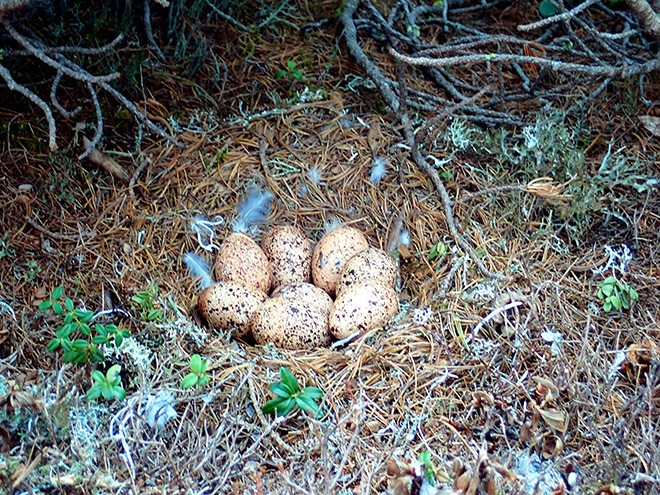 The conservation office replaced seven unfertilized eggs of the female rock ptarmigan successfully with eight fertilized eggs brought from four facilities in Japan, including Tokyo’s Ueno Zoo, on June 7. The photo was taken around Mount Kiso-Komagatake in the Central Japan Alps. (Provided by the Environment Ministry)

NAGANO--Five endangered rock ptarmigan chicks have been found dead in the Central Japan Alps in Nagano Prefecture despite the Environment Ministry's efforts to nurture them, after fleeing their nest.

The ministry’s Shin-etsu Nature Conservation office here announced on July 2 that it discovered the dead bodies of the five chicks and three eggs that failed to hatch.

When footage from a camera set up near the chicks' nest was checked, it showed up to 10 Japanese monkeys.

“Right after the eggs hatched on June 29, monkeys came to the nest, which surprised the female rock ptarmigan, and she fled,” said researcher Hiroshi Nakamura, a professor emeritus at Shinshu University who specializes in rock ptarmigans.

He also said that the chicks panicked and tried to run away and “died because their body temperatures dropped quickly.”

The rock ptarmigan, designated a special natural treasure, was believed to have gone extinct in the Central Japan Alps, but two years ago a female of the species was found for the first time in half a century there.

Since then, the nature conservation office has been trying to propagate them from the female bird, which was found on Mount Kiso-Komagatake at an altitude of 2,956 meters.

Rock ptarmigan chicks that hatched last year are believed to have been eaten by martens and other animals.

So, this year the conservation office planned to protect the chicks right after hatching and create a breeding population by adding 20 rock ptarmigans of three families from Mount Norikuradake in the Northern Japan Alps.

Despite the latest setback, the conservation office still plans to transfer the three families of rock ptarmigans to the Central Japan Alps as scheduled.