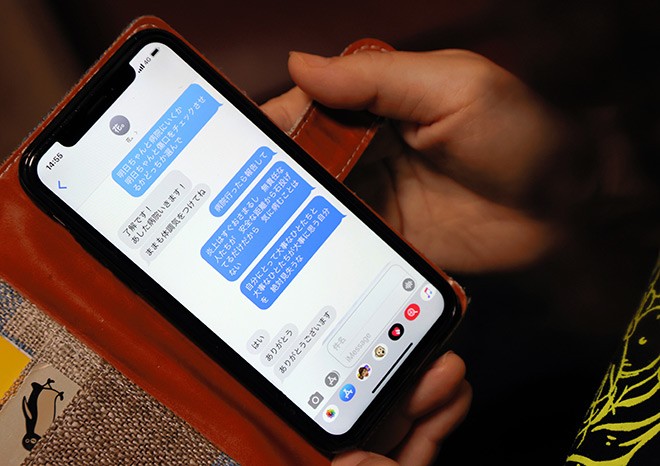 In an exchange of text messages between Kyoko Kimura and her daughter Hana, a reality TV star, on March 31, Hana said she had cut herself because of negative comments on social media. (Toshiyuki Hayashi)

The mother of a young reality TV star who committed suicide following intense cyberbullying is claiming that production staff provoked her daughter into getting physical with her co-stars.

“I want people to know the truth and restore Hana’s honor,” said Kyoko Kimura, 43, in an interview with The Asahi Shimbun on July 4.

She said her daughter, Hana Kimura, who was a 22-year-old professional wrestler, confided to her that while filming the reality TV show "Terrace House" the staff told her to slap a co-star in the face.

The show features the daily lives and romances of three women and three men sharing a house. Produced by Fuji Television Network Inc., it has been streamed on Netflix and elsewhere since May 2019. Kimura joined the cast in October.

In an episode that aired on March 31, a male housemate damaged Hana’s wrestling costume by putting it in a dryer. Hana was enraged. After a long tirade, she slapped a hat from his head.

After that, snide remarks against Hana began appearing on social networking sites.

The same day, Hana posted an image that showed she was engaging in self-harm.

Kimura was worried and texted Hana, to which she responded, “(The scene) came under fire, and I felt sorry and cut myself.”

Trying to encourage Hana, she said, “These people are irresponsible and throwing rocks at you from a safe distance.”

But on May 23, about two months after the exchange, Hana killed herself.

“I am sorry for being weak” was the last message she posted on social media.

Eight days before her death, Hana told her mother that the production staff told her to slap the male housemate’s face while shooting the confrontational scene.

After thinking about what to do, Hana chose to slap the hat off his head instead.

Hana confessed that to Kimura, who also used to be a professional wrestler, in a car.

“It’s in a pro wrestler’s nature to go out of their way to deliver what is expected,” Kimura said. “I guess saying ‘no’ was difficult for Hana.”

Kimura harbors distrust against those who produced the show.

“They seem to prioritize ratings over Hana’s mental state.”

Fuji Television is expected to release the results of an internal investigation.

At a news conference on July 3, network representative Toru Ota denied the allegation that production staff asked Hana to engage in “face slapping.”

The cast of "Terrace House" signed an agreement stating they follow production and filming policies and instructions from staff.

Ota, an executive managing director and famed drama producer, said the agreement “does not require the cast members to obey every production instruction and change their emotional expression and behavior.”

Kimura was not convinced.

“Cast members and producers are not equal. Are they saying that a 22-year-old child could say ‘no’ in that situation?” she said.

“'Terrace House' calls itself a reality show but the content is not. I want the producers to admit that it was a fiction that invited character assassination,” Kimura said.

Kimura said she is considering filing a lawsuit against the production.

(This article was written by Takumi Ono and Mayumi Mori.)